Someone brought him a Gideon’s Bible from a Kentucky hotel that had been horrifically defaced. 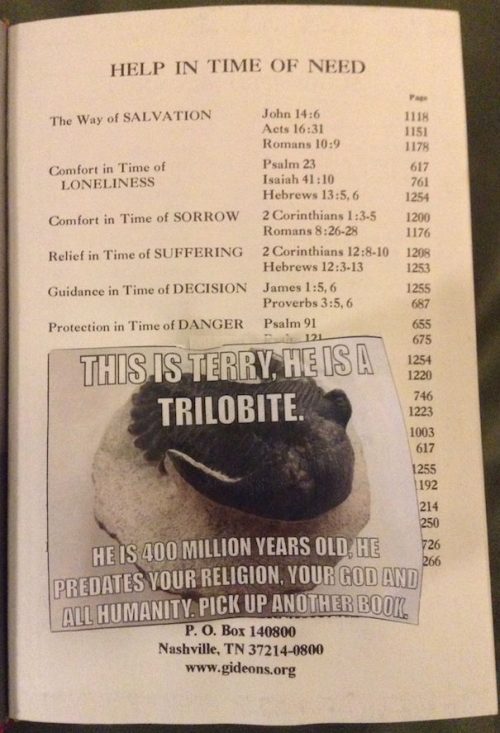 Someone came prepared. I usually just scribble something caustic on the first page.

But Ken is irritated, and he has a rebuttal to the argument that something might be older than the Bible: IS NOT!!!.

Whoever left this trilobite image is scientifically wrong. Terry the trilobite died, was buried and fossilized just 4,350 years ago during the global flood of Noah’s day. These creatures—with their incredibly complex eyes—aren’t evidence of millions of years of evolution, but rather of God’s creative power and the destructive nature of the flood.

scientifically wrong…jeezus. So he simply asserts that the fossil is a hundred thousand times younger than the scientific evidence says it is, and claims that is still a scientific position.

You know, there are a lot of Christians that have no intellectual difficulty with the idea that the universe is far older than Ken’s goofy, anti-scientific interpretation says it is. Answers in Genesis is the muck at the bottom of a rotten barrel of bad ideas.

I’d try it » « Here are some awful Red Pill stories, but hey, did you know feminists are just as bad?