Last week, I posted about my deep regrets at ever being involved with New Atheism, and oh boy, have I been getting the hate mail. The most amusing thing was seeing an atheist facebook group filling up with complaints about how awful I am, and simultaneously whining that they never heard of this New Atheism thing, what four horsemen, and hey, wasn’t that just some nasty slur the theists threw at us? Memories are so short, and so easily diverted into safe and easy denial.

But I am not alone in my rejection of the Old Guard. The Guardian is asking “Whatever happened to New Atheism?” as if we didn’t know. I’ll tell you what happened: it foundered on the egos of its leaders, and their desire to steer it onto the shoals of misogyny, racism, and war. Hmm…maybe the “Four Horsemen” were appropriately named after all.

The article tears into the Four Horsemen, but especially into Harris (Hitchens was spared the worst of it by dying, I would guess).

The intellectual path followed by Harris is most balefully illustrative of the poisonous seeds that were always present in New Atheism. At one point here, the men admire themselves for their willingness to consider truths that might be politically dangerous. For instance, Hitchens says, if the notorious hypothesis of the 1994 book by Richard J Herrnstein and Charles Murray, The Bell Curve – that black people are genetically inferior in intelligence to white people – were true, it shouldn’t be ignored. Luckily, Hitchens hastens to add, that example is not viable. Later on, however, Harris brings up the argument again. “If there were reliable differences in intelligence between races or genders,” he begins, before Hitchens cuts him off dismissively. “But I don’t think any of us here do think that that’s the case.”

Hitchens might have been too generous. In 2018, Harris caused a storm by inviting Murray on to his podcast for a weirdly uncritical two-hour conversation. Murray, Harris claimed, had been the victim of a terrible “academic injustice” for the way in which his notions about the inherent cognitive inferiority of some “races” had been rejected by the scientific establishment. (Lest you worry about Murray, be reassured that he is still a fellow at the American Enterprise Institute, which is funded by the ultra-conservative billionaire Koch brothers.)

This is where the preeningly fearless insistence on entertaining uncomfortable questions can so easily lead. Harris ended up in the company of the “alt-right” and the so-called “intellectual dark web”, populated by people who portray themselves as valiant enough to say what you’re not allowed to say any more, and are constantly invited on rightwing talk shows to say it. For some, New Atheism was never about God at all, but just a topical subgenre of the rightwing backlash against the supposedly suffocating atmosphere of “political correctness”. In its messianic conviction that it alone serves the cause of truth, this too is a faith as noxious as any other.

This was the gigantic strategic error of the New Atheism. The time was right to make a strong appeal to humanist values and grow a movement around basic decency and fairness, and instead, the most influential voices decided to draw on the nascent alt-right and get rich quick off regressive values — they aimed the ship of atheism straight into the Trumpkin swamp, a mob of people who are explicitly anti-anti-religious, and now all they can do to maintain some popularity is to double-down on the ignorance and racism and sexism that that group likes. Reason and rationality have been turned into empty buzzwords. It’s a real shame. 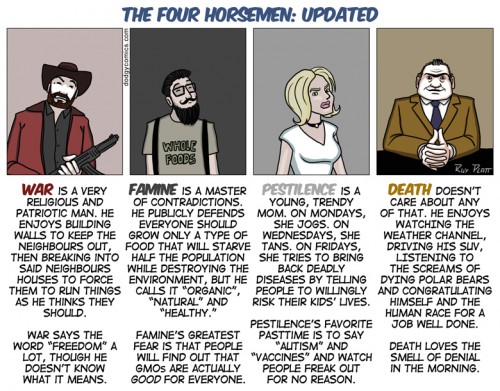 How dare the APA refuse to recognize that men and boys are violent creatures of instinct » « A lifetime of science!