I just got back from tending my herd, who are all doing well. I’m anxious to get more egg cases, though, so I’ve been feeding them more and frequently — I gave each vial of spiders a half dozen flies today. I noticed some behavioral differences. The young adults each quickly moved on a fly, immobilized it, and settled down to biting and eating. Vera, currently the most senior spider in the colony, had a different strategy: she would scurry over to a fly, quickly wrap it up, and then move on to another. She had 5 flies immobilized and writhing in lightly webbed cocoons in about 30 seconds. It reminded me of calf-roping at the rodeo. I was impressed. Then she rubbed her forelegs together and cackled something vulgar in spider language* before moving back to her first captive and turning its guts into soup.

The embryos in the one egg sac I have are coming along nicely, showing nicely differentiated legs. I’m avoiding manipulating them much, since I’m more concerned about getting a strong, healthy third generation going, but they look to be about stage 13-14 by the standard staging series, which means I’ll probably have post-embryonic spiderlings by this weekend, and am going to have to spend a bit of time sorting them out into separate vials. This cohort of spiders are all inbred grandchildren of Gwyneth. I’m sad to say that Vera has not managed to produce any viable offspring for the colony — I did hear her sneeringly announce that she was not a breeder, and in particular wasn’t going to breed to produce servile offspring for an inferior species.

I’ll put the diagram of the developmental stages below the fold, so arachnophobes may not want to go any further, even though these are cute li’l babies in the image. 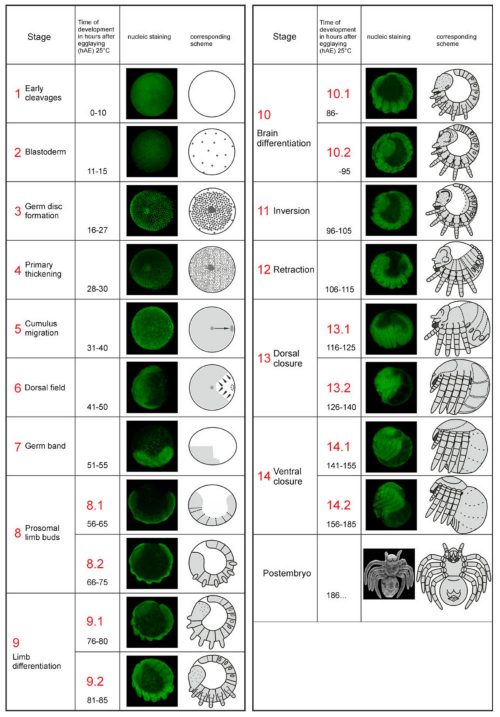 In other news, I also got all the fly bottles and old vials washed, finally, so my sink was full of thousands of fly corpses. It was kind of disgusting, actually, but I guess I’m used to being elbow-deep in dead Drosophila by now.

*I’ve been trying to learn the tongue. I can’t make many of the sounds**, so I’m only able to listen, and most of the conversation from their end consists of dire threats and morbid gloating over the bodies of their prey.

**Mostly ghoulish slurping noises, hisses, the rasping of cuticles, and oddly pleasant sussurations of hairs brushing past one another.