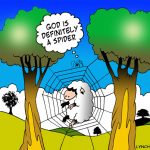 I’m away. I’m on a break. I’m distracted by an adorable baby granddaughter. But even with those diversions, the stench of Andrew Sullivan’s latest column has disturbed my rest. It is just too stupid. I was stunned by the first paragraph, staggered a little further, and collapsed in defeat.

Everyone has a religion. It is, in fact, impossible not to have a religion if you are a human being. It’s in our genes and has expressed itself in every culture, in every age, including our own secularized husk of a society.

I’ve seen this a thousand times before, and I know what will follow. Sullivan is going to give us his own, personal, idiosyncratic definition of “religion” that he has made so broad and nebulous that he can assign it to everyone, no matter how godless they might be, and he’s going to rely on general human properties that he can then interpret as “religious”.

By the way, no genes for religion have been identified. Not one. He’s lying, unsurprisingly for someone who liked The Bell Curve. He links to a book by some guy named Dominic Johnson, who does have a degree in evolutionary biology, and from what I can see relies entirely on bullshit evolutionary psychology to make his claims.

By religion, I mean something quite specific: a practice not a theory; a way of life that gives meaning, a meaning that cannot really be defended without recourse to some transcendent value, undying “Truth” or God (or gods).

I see that he has also redefined the word “specific”, because that is broadly vapid nonsense, not specific at all. A “practice”? So is writing garbage for NYMag his religion? Appearing on Bill Maher’s show is a religion? Except that it is specifically not a theory, but at the same time it requires a “transcendant value” that gives “meaning”. This is such a muddled mess of contradictions and immeasurable assertions that it in itself gives the lie to the idea that it could be based on something as concrete as a gene. He really wants us to believe that this wobbly bullshit is a load-bearing pillar…of jello. And it’s all set up to support this groaner of a familiar assertion by theists.

Which is to say, even today’s atheists are expressing an attenuated form of religion.

If your definition of religion is so amorphous that you can claim everything is a religion, then you’ve said nothing useful. You’ve turned religion into white noise. Religious people ought to find that as offensive as atheists do.

Their denial of any God is as absolute as others’ faith in God,

Wait. I thought religion was a practice, not a theory. But now he’s including “faith” and ideas about a hypothetical concept. He can’t even stick to his own definition!

…and entails just as much a set of values to live by — including, for some, daily rituals like meditation, a form of prayer.

So now it’s defined by daily rituals? I get up in the morning, brush my teeth, have a cup of coffee…this is now, in the mind of Andrew Sullivan, a religion. Hey, if I didn’t get out of bed, my life would be meaningless, if I never brushed my teeth, I’d be disgusting and would die of dental disease, and no coffee…that would be an unimaginable hell.

Also, my spiders spend their days in the endless ritual of maintaining their webs, and their lives would end without them. Therefore, spiders are religious. Maybe they don’t have a concept of a god (which I don’t know for sure), but remember…religion is a practice that gives meaning to life. And is genetic. If you can claim that atheists who explicitly reject gods and religion are religious, we’re at the point where you can’t stop me from claiming spiders are religious.

…(There’s a reason, I suspect, that many brilliant atheists, like my friends Bob Wright and Sam Harris are so influenced by Buddhism and practice Vipassana meditation and mindfulness. Buddhism’s genius is that it is a religion without God.)

OK, I’m done. I can read no further than the point where he claims Sam Harris is a brilliant atheist because he follows some Buddhist practices.

When will NYMag wake up to the fact that they’ve got a columnist who writes drivel? Probably never, since the NY Times has a similar problem, and will never change.

Every time I watch the news. Every time. » « A solution to the “Baby It’s Cold” problem