The National Library of Scotland has made available to the public digitized versions of all 3 volumes of the 1771 edition of the Encyclopædia Brittanica. I’ve been browsing through it, and it’s a fun read — it doesn’t seem to be able to make up its mind about whether it’s a dictionary or an encyclopedia, but it does have long sections on 18th century agriculture, algebra, and chemistry, so if you ever want to know what people actually thought about those subjects over 200 years ago, you can look them up.

There isn’t much on the stuff I study though — biology hadn’t been invented yet, so you’ll search through the “B”s fruitlessly. I thought maybe there’d be something on embryology, but no, this is it, and it’s rather brutal. They were straightforward about abortion back then. 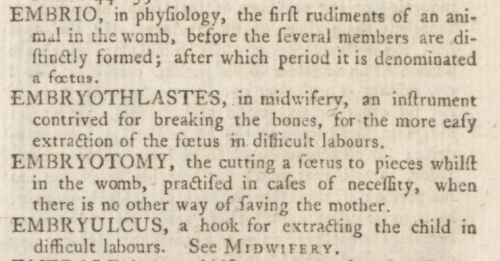 There is a substantial illustrated section on midwifery, though, so if you ever need to deliver a baby without anesthesia or sterile technique, but you do have a great big handy pair of kitchen tongs, this section will do it for you.