There are these weird salticid spiders that have evolved a radically different morphology — they live in ant nests, and physically mimic the ants. Look at this ant-spider. Isn’t this amazing enough? 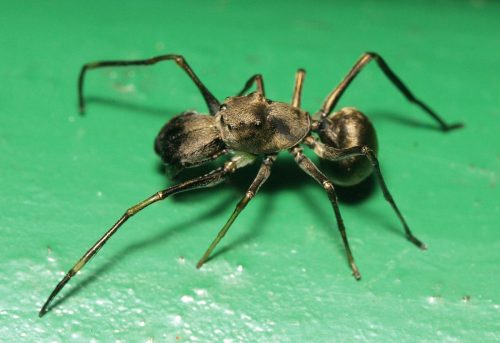 That’s a spider? Yeah, count the legs. It’s trying so hard to fit in with tunnel-dwelling insects with three body segments, you just have to applaud the effort.

What’s more, they’ve acquired another evolutionary novelty: they secrete ‘milk’ to feed their young, and have extended parental care. The necessity of milk production was tested with the cruel experiment of painting over the epigastric furrow (the site of secretion) with White-Out, and what happened? All the spiderlings starved to death. The utter bastards. There are things you can get away with when working with invertebrates that you couldn’t do with cute fuzzies with bones. Try doing that experiment with bunnies, just be prepared for torches and pitchforks.

There’s another revelation in this figure caption. 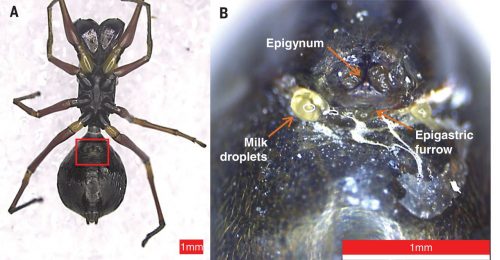 Spider milk and its secretion site in Toxeus magnus.

(A) Ventral view of mother. (B) Milk droplets secreted after slight finger pressure on abdomen.

Did you get that? They are milking spiders. I come from a long line of Norwegian dairy farmers in Minnesota, so you can guess where my mind went from here. Can I get state and federal subsidies for my spider farm? I’ll have to look into it.

The study is primarily about the life history of this spider species, with some experimental manipulation, and it does a thorough job of that.

It’s missing one thing, though: any analysis of the chemical make-up of spider milk. I’m going to take a wild guess that unlike mammal milk, which is rich in fats and carbohydrates, spider milk is going to be more like a protein shake — that it’s going to be in many ways similar in composition to the dissolved bug guts that spider adults live on, to simplify the transition from an independent hunting spiderling to a spiderling with an obligate dependency on parental care. Which means a) humans can probably synthesize it by homogenizing masses of fruit flies in a blender with some digestive enzymes, and filtering out the chitin, and b) there’s not going to be much of a human market for it. Alternatively, they suggest that spider milk may have evolved from the breakdown of trophic eggs — that is, eggs produced that do not develop, but provide a food source for other members of the brood. In that case, it may be a soup of phospholipoglycoproteins, similar to the vitellogenins of other arthropods, and its closest vertebrate analog would be egg yolks.

Inquiring minds want to know. They’re going to have to milk a lot of spiders to get enough to analyze, though!

P.S. There is a Minnesota milk song. They might have to change some of the hand gestures.

The one thing you need to know to succeed in life » « No more stonewalling, NdGT