Social media enables violent far-right ideologues to build self-reinforcing communities that encourage even more violence, even more extremism, in an ever-escalating cycle of mutual goading and behavioral modeling that leads to outbreaks of real-world viciousness. When your online friendships are built on a foundation of anti-semitism, individuals vie to be the most outrageously anti-semitic member of the community they can be, and when someone, like the Pittsburgh mass murderer, breaks through to peak anti-semite and actually guns down innocent Jews, he has achieved a kind of apotheosis — he knows his friends will be praising him, will be impressed by him, will consider him a role model, and even though he might be in prison for life, he can feel content that he has won the respect of his peer group. Someone like me might feel horror and disgust and contempt for him, but he doesn’t care, since I’m not one of his friends, and he despises me and my kind. My revulsion is actually a reward, as far as he is concerned. Like Anders Breivik, social condemnation by others fuels his righteousness.

One source of this problem isn’t that all social media is bad, but that it is built in such a way as to encourage these isolated communities of hate to grow — there are no moderators. The adults have all left the room. In fact, the corporate owners of these networks have consciously decided that they will not break up the little klans that form, and will actually punish anyone who tries to intrude on their vicious circle jerks with ostracization. This is glaringly obvious on Twitter and Facebook — they have “rules” and “terms of service” that allow genuine brutality to dribble through, but anyone who dares to disrupt the cycle of reinforcement is a threat to their business model. See for example how they try to silence Feminista Jones and other women who respond to misogyny. It ain’t the misogynists who get put in their place.

Fuck. You. I reported a man saying I should have my throat sliced and you fuckers said it didn't violate the TOS but when I sarcastically wrote "Kill All Men" you suspended me.

Choke on 60 feet of barbed wire.

That doesn't violate TOS, btw. You said so yourselves! https://t.co/REvaWLVNu2

I thought this was a quick smart take on what’s going on.

Exactly. “Our political conversations are happening on an infrastructure built for viral advertising.” And what sells in America? Sex and violence. There’s still a lot of puritanism lingering in our society, so sex gets throttled and relegated to porn — once again, the adults leave the room and responsible, serious discussion is abandoned. Violence is supported, so it thrives everywhere, even on Twitter, as long as it’s thinly veiled and has some minuscule amount of deniability. Twitter and Facebook want to be heavily used as gateways to bigotry and violence and misogyny, and they’ll just boot out the people who get too explicit in their charged recruitment of hate mobs. They get it both ways. They get to foster the viral advertising of self-reinforcing communities of racists, all in the name of free speech, and they also get to piously declaim how much they deplore violence by sometimes banning the more outrageous perpetrators, like the MAGAbomber. If they too often get around to kicking someone out after the unspeakable has been done, well, hey, they still demonstrated their commitment to both free speech and peaceful dialog at the same time, right? Win-win! See, everyone? It’s safe to advertise on our social media, we’re weeding out the bad guys who would soil your brand!

And of course, there is no real punishment for the barbarians. Kick ’em off Twitter, which is only a vocal 10% (optimistic estimate) asshole, and they can go to Gab, which is 100% pure, undiluted Nazi asshole, and they can find even more reinforcement. There are no responsible adults at all on Gab. It’s pure heaven for freeze-peachers who want the ability to engage in social interactions with zero obligations to, you know, society. So where did the Pittsburgh mass murderer flourish? On Gab, of course. And how are a significant subset of the Gab client base responding? I took a look.

A few are approving of banning the murderer, but also seem to be motivated by the fact that this is a threat to their beloved service — oh, no, we might be expected to be responsible for what we say! Others are still, unbelievably, babbling about how this is a “false flag” attack funded by a Jewish conspiracy.

I’m all for free speech, but there should be consequences when that speech is a threat to people’s lives. The consequences are starting to roll in, again too late to spare the 11 lives lost in Pittsburgh. Among those consequences: Paypal is denying them service. Hit them in the pocketbook. 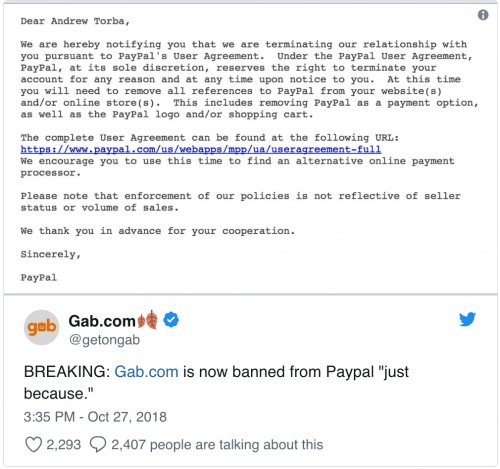 I like that. To Gab, getting banned because you run a service that enabled a man to rage against Jews and announce that he was “going in” to commit mass murder is incomprehensibly just because.

By the way, Twitter: why do you allow an account that is solely for recruiting new members to a Nazi forum on your service? And verify it with a blue checkmark? I know. It’s because you want their traffic.

In other good news, Gab’s hosting service is kicking them off. 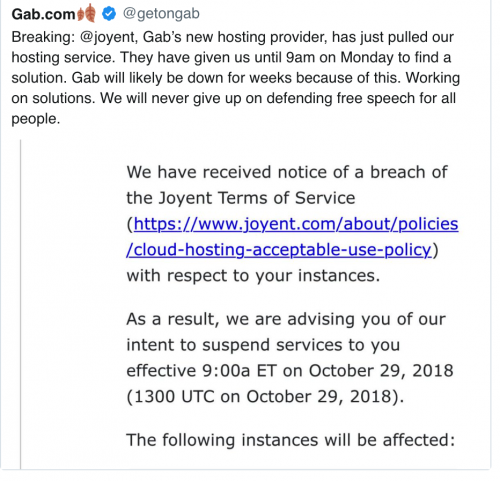 Good. It’s a start. If you think you can’t encourage open discussion and free speech without allowing people to advocate for genocide, it’s about time you learned something about reality.

The Pacific Northwest is full of witches » « Pancakes