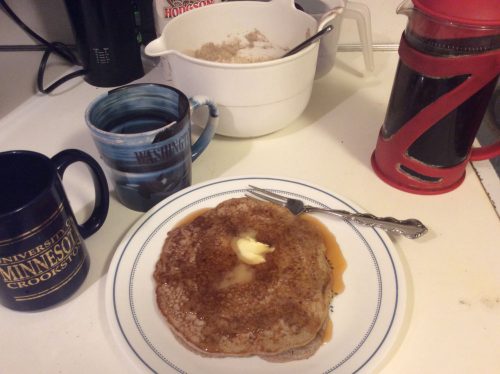 In my 20s, I started making pancakes on Sunday morning. It became a tradition. Whenever I make Sunday morning pancakes, I think back to being young, newly wed, and poor, and bringing pancakes and coffee to my wife in bed, which was only a mattress on the floor of a tiny studio apartment.

In my 30s, I had young children who were excited about pancakes in the morning — they wanted chocolate chips in them or for them to be made in the shape of Mickey Mouse. Whenever I make Sunday morning pancakes, I think back to being young parents with little kids who would giggle over a special breakfast.

In my 50s, the kids were moving out, we were alone again. I made pancakes less often. When I did make them, every time I’d be thinking about what Alaric & Connlann & Skatje were doing, far far away. Those were lonely, wistful pancakes.

In my 60s now, I made Sunday morning pancakes and coffee and brought them to my wife in bed, and I thought all of those memories at once — I was an old man in a mostly empty house, I was a father to a very serious teenager, I was the parent of a small swarm of adorable little kids, I was a newly wed student, I was all of these people.

I think this is what getting older means. Everything, every little thing, even making pancakes, begins to reverberate in your head and floods you with meaning.

I believe in responsible free speech » « Another shooting. Nothing will change.