Existential Comics makes an interesting point: most discussions of ethics in philosophy are about justifying what we feel are acts of goodness, like feeding the poor.

For a great many questions of practical morally, these three systems [deontology, utilitarianism, virtue ethics] will agree, such as “should you give your extra food to a starving man.” This would have a good consequence, be a virtuous intent, follow a good rule, and would be as God commands it. In fact, such moral values are so universal that it is hard to think of any philosophy, culture, or religion at any time who says that a rich man should walk by a starving poor man and not be obliged to give him bread. 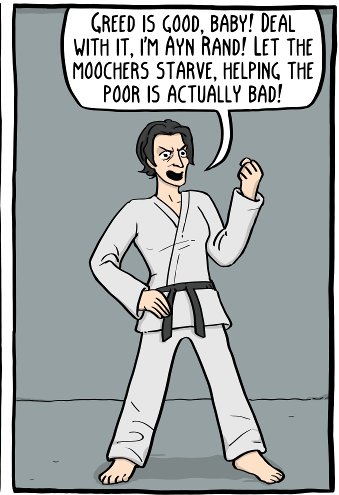 Not that I want to find myself on the same side of the fence as Rand, but isn’t it possible that deontology, utilitarianism, virtue ethics, and divine command philosophy are really just attempts to rationalize emotional states and empathy, just as Randian objectivism is trying to rationalize greed and selfishness, and that the philosophy is irrelevant to the humanity of good actions?