I must update my diary. Change is happening fast, and I begin to fear that my experiment, my delving into esoteric, alien knowledge, could outstrip my feeble efforts at control. Let this be a record to explain my fate.

Prelude: I opened the mysterious sac, and to my delight, discovered beautiful jewels: like opalescent pearls, they rested quietly in a great mass, promising fortune for the future.

Day Zero: I kept the pearly orbs in a glass chamber, where I could observe them whenever I desired. I often desired. My eyes were drawn to their simple elegance, time after time. My obsession, I realize now, was a portent of danger.

Day One: O Glorious Day! The orbs dissolved away to reveal candy-like, plump babies, pale and soft, capable of only feeble stirrings of their pallid limbs. Such innocence warmed my heart.

Day Two: Their limbs have lengthened. They walk about clumsily, but still somewhat endearingly, peering about with their eight eyes. I try not to notice that a few of their siblings seem to be motionless, empty husks, drained of all life and flesh, but perhaps they are just molted exoskeletons? One can hope. I feel a vague disquiet, so as a precaution, I scatter a few flies in the dish.

Day Three: I peek into their chamber. All is quiet. The flies all lie dead and crumpled, sucked dry, but of the Children of the Orbs, almost nothing. The dish is quiet and empty. I examine the egg sac, and find it also nearly empty, with only a few scouts meandering about, and a tiny few babies just stirring at the bottom. Where have they all gone?

Then I notice a thin strand of webbing from the egg sac, stretching upward and to the side. I follow it, and there, massing on the lip of the chamber, is a great army of spiders, clustering together and building a citadel of cobwebs. They are working together. They are cooperating. What are they planning? Escape? Rushing their captor? Constructing an altar for the dark ritual that will summon Atlach-Nacha, the spider god, and begin their reign? I do not know.

END_OF_DOCUMENT_TOKEN_TO_BE_REPLACED 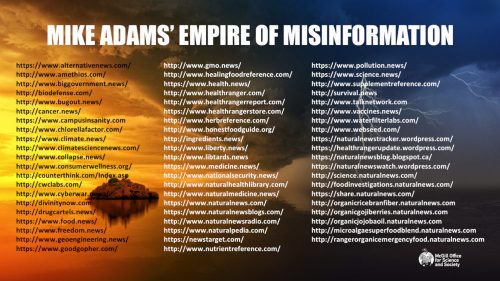 Kent Hovind has been working on “Dinosaur Adventure Land”, Part Deux, on a pretty piece of property in Lenox, Alabama, and it’s gotten him a credulous, friendly online interview. If you want to see what it looks like, Hovind himself gives a video tour — there doesn’t seem to be much at all there. This one photo says it all. 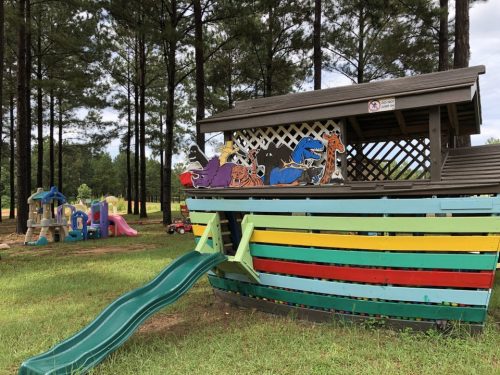 Man, it must be rough when he and Ken Ham get together, if they ever do. It’s a toss-up whether Hovind would be mortified in the competition over who has the fancier big boat, or Ham who would be shamed by the fact that Kent is offering the same amount of scientific information that he is.

Quick video below the fold.

END_OF_DOCUMENT_TOKEN_TO_BE_REPLACED

This is an amusing campaign ad against the Republican in Minnesota’s 3rd district — that’s the big suburban blob on the west side of Minneapolis that looks like it’s trying to eat the city. The district, not Erik Paulsen, who’s much more evasive than that.

Creativity and humor, that’s what we need more of.

It takes great courage to step out and expose powerful, awful people, and as she knew ahead of time, Christine Blasey Ford is also facing the consequences of her bravery.

Christine Blasey Ford was hesitant to come forward with allegations of sexual assault against Supreme Court nominee Brett Kavanaugh because she feared facing public attacks. “Why suffer through the annihilation if it’s not going to matter?” she said in an interview with the Washington Post.

Her fears were not unfounded. Within hours of revealing her identity, personal attacks were launched against Ford. Some senators expressed their doubts about the truthfulness of Ford’s statements. Senator Orrin Hatch asserted that Ford was “mixed up.”

Now, the New York Times is reporting that Ford is being sent death threats. An unnamed source told the Times that following the threats, Ford and her two teenaged children moved out of their home. Ford also hired private security. One of the messages reportedly said that Ford had “6 months to live, you disgusting slime.”

I hope those two kids are fully aware of the sacrifice their mother made for the truth, and they’re proud of her for it.

This guy, Angelos Sofocleous, was elected to head the humanist group at Durham University. He has resigned. He has to blame someone.

In light of recent events, I have taken the difficult decision to resign from the position of President-Elect of Humanist Students.

These events involved a retweet of mine saying ‘RT if women don’t have penises’, and certain other criticisms of the transgender movement, as well as suggestions to improve the movement’s actions. Sadly, these views were taken to be ‘transphobic’ by individuals who cannot tolerate any criticism, either of their movement or their ideas, and are unable to engage in a civilized conversation on issues they disagree on.

Would you believe he’s a philosophy and psychology student? I’m kind of curious about those “certain other criticisms” and about how he defines “woman”, because he seems to treat it as a simple distinction based on the presence or absence of a penis. It seems rather superficial and narrowly phenomenological for someone in either of those disciplines, but on the other hand, I also don’t want to play into his hands and debate the subject with him, because he also says this, along with hiding behind “freedom of speech!”:

Even if one makes statements which are wrong beyond doubt (e.g. ‘Homosexuals shouldn’t have the right to marry’, ‘Nazis did nothing bad’, ‘Slavery is moral’, ‘Women are inferior to men’), one needs to have a conversation with that individual and explain why they are (obviously) wrong. Engaging in a debate does not mean that you give equal status to your opponent.

This is where the fetishizing of free speech and debate goes bad. I get to deny your basic humanity and your right to exist, and you now need to convince me otherwise. I get to freely make assertions that don’t challenge my privileged status but do potentially do great harm to you, and I have no responsibility or obligation to others — others who may even consider those statements “wrong beyond doubt” — to make defensible statements, and the onus is entirely on you to address them, and if you don’t, you are an intolerant tribalist. Why do you get so angry when I merely want to deny your civil rights, or enslave you, or kill you? That’s not very logical.

Don’t you realize that Sofocleous is the victim here?

I hope we belonged in an environment in which we were able to speak up without the fear of being fiercely attacked and silenced.

I think there are a lot of people who would like to be able to simply exist without the fear of being fiercely attacked and silenced. Can we give them priority before your right to define them away?

Over the last few days I showed you how I peeled open a spider egg sac, and then the next day I showed you how the eggs are still round and pearly. Now today, the day after that, I find that all the babies have simultaneously hatched, and they look like pale little gummi spiders. Extraordinarily cute!

Video below the fold.

END_OF_DOCUMENT_TOKEN_TO_BE_REPLACED

For strange gourds. I saw this one, and for some mysterious reason, had to have it. 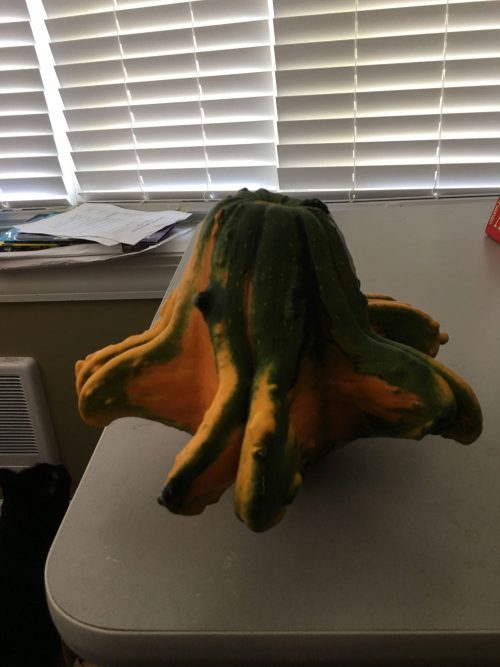