Ahh, evangelical Christians…so persistent, so illogical, so arrogant. There’s a guy who has been pestering me for years, and he wrote again today. I’ll include most of it here, because one notable thing about him against the background of the usual mob of people who write is that he actually has decent command of spelling and grammar. He couldn’t argue his way out of a wet paper bag, though.

Isn’t that nice? He’s read some books about science. It’s an open question whether he understands them, though, since he never talks about the contents, nor will he in this letter. It’s a kind of meaningless nod, to say he has some books on his shelf I might have read, too, but nah, he’s going to talk about a sermon he heard, instead.

Also, it’s very nice to hear that Harry Kroto had recommended me to the evangelicals that pestered me. Harry and I had quite a few conversations before his death — he was deeply passionate about science education, and used his Nobel as a tool to fund all kinds of outreach programs. He was a genuinely good guy, and ferociously godless as well. 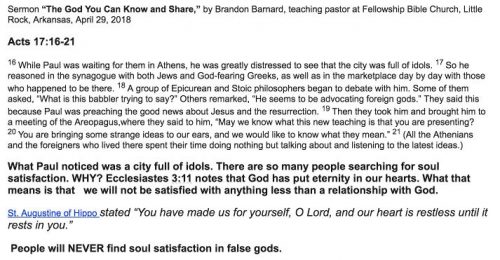 See what I mean? All he writes about is the stupid goddamn sermon he heard recently, and he seems to think that sprinkling Bible verses everywhere will be persuasive. I believe there was a Paul who lived in the first century AD. I believe that he traveled about, preaching. I can believe he visited Athens, and that philosophers were curious about him (I don’t believe that all Athenians did nothing but listen and think about the latest ideas, though). Nothing in this account contradicts a reasonable understanding of people and the natural world. So, so what?

He just resorts to puking up more Bible quotes. 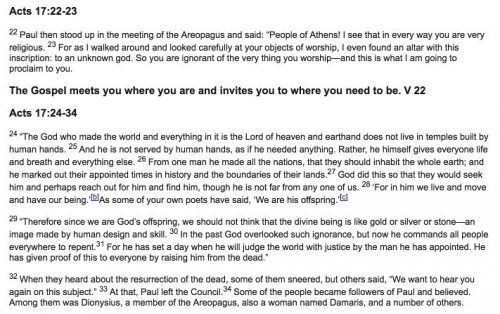 Some guy insisted, 2000 years ago, that his god was real and true, and some people believed him, and others disbelieved him. There are prophets everywhere who have been saying similar things — Mohammed, Joseph Smith, L. Ron Hubbard. Why should I believe? Because you thump your holy book harder?

Here are his conclusions.

No evidence given. We’re just supposed to accept this because it’s in the Bible. You know, this is not an approach that’s ever going to work with people who deny the authority of scripture.

But wait! He has a little evidence to throw at us at the end!

So they found that the Bible names 53 people who have been confirmed to have really existed.

Robert Downey Jr and I used to get together to drink beer and build robots in Wakanda several years ago — Harry Kroto was there, too, as well as Harry Potter, and the leprechaun from Lucky Charms. Downey later used the skills I taught him to build an armored suit and become famous as Iron Man. Unfortunately, we had a falling out because his girlfriend, Pepper Potts AKA Gwyneth Paltrow, found me irresistible and kept throwing herself at me, and Iron Man refused to believe me when I said I found her ditziness unattractive. So I moved to Iceland and married a far more attractive woman named Mary and we went on to found the city of Little Rock, Arkansas. You’ve probably heard of it.

There are 6 names in there, maybe more if you aren’t particularly rigorous in your fact-checking, that you can easily confirm belong to people or places that verifiably exist.

Therefore, the whole story is true.