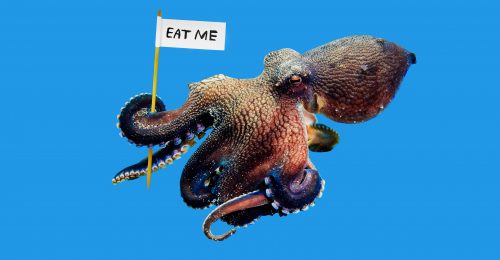 I am horrified by this article by Daniel Engber — remember that name — that denies that amazingness of cephalopods. I thought everyone loved them, but no, there is apparently a backlash of contrariness beginning.

For 10 years, I subscribed to this very point of view, forgoing any dish with octopus on account of the animal’s half a billion neurons, its sophisticated behavioral repertoire, and its apparent capacity for learning. How could one go on eating something so remarkable?

But, reader, I’m no longer having it. Or rather, I should say that in the past few years I’ve been having it every way I can: raw on sushi rice, braised with black olives, grilled with garlic and a pinch of Spanish paprika, etc. You see, as the cult of octopus intelligence has taken on adherents, I’ve begun to have my doubts. A slimy, brainy, eight-armed sea snail has been rebranded, uncritically and all at once, as the soulful “genius of the ocean.” But are Inky, Otto, and their ilk really what they seem—or could it be that we’re the suckers in this story?

<gasp> Everyone. Point and hiss at the heretic. Shun him.

Some of his arguments…OK, I will admit they do have smaller brains, they don’t exhibit the degree of abstract thought we might expect of a complex intelligent creature, and there are brainier aquatic organisms, like cetaceans. But still, this is a bad argument:

Hochner and his colleagues made several big discoveries, among them how the octopus controls the nearly infinite degrees of freedom in its arms. In short, it simplifies the task and does its best to dumb things down. Instead of waving all those arms around willy-nilly, the octopus falls back on a narrow set of “motor primitives.” When it reaches to a piece of food, for example, it aims the base of its arm in the right direction and then elongates and unfurls along its length. When it needs to bring an object to its mouth, it bends its arm in three specific places. And when the octopus crawls along the ocean floor, it works its arms like worms: One or two will shorten up, sucker to the ground, and then push off, always with the same amount of force.

From a scientific point of view, these facts are very interesting: They tell us how the octopus evolved to handle its outrageous anatomical complexity. But from the octopuses-are-amazing point of view—the perspective that might inspire you to get octopus tattoos, buy octopus best-sellers, or watch octopus-related content on TV—these facts seem a little sad. Sure, it makes a lot of sense for the octopus to use simple motor programs to control its arms instead of calculating every bend and twist of eight muscular hydrostats. But wouldn’t it be a little more impressive—wouldn’t it be cooler—if the octopus really did those calculations?

All right. Go outside with a ball right now, and throw it to someone. This is actually an interesting problem in geometry and physics, yet people who know no math and no theoretical physics have no problem doing this at all. Wouldn’t it be cooler if humans really did those calculations?

Engber almost makes up for his heresy with his conclusion. Almost.

The modern octopus stands not for terror, exploitation, and expansion, but for amazement and delight.

We know that cephalopods can change their colors in an instant, or even flip their boneless bodies inside out. Now we’ve inverted octopuses for ourselves. We say that we’re enchanted by their shifty, frisky otherness, but I think it’s more apt to say that we’re the victims of that quality—that we’re beguiled by their talent for disguise. Yesterday we peered into the main and thought we’d found a ruthless, suffocating tyrant. Today, we see a charming rascal. Who knows what sort of animal we’ll think we’ve come across tomorrow. The mollusk of a thousand faces appears at different times in different ways, as a monster or a genius or perhaps a bag of slime. Maybe that’s the secret at the heart of its phylogeny: We may be on the hunt for greater meanings, but the octopus evolved to get away.

OK, so I won’t sic the Kraken on him just yet. Yet. But I’ve got my eyes on you, Engber. Terror and exploitation aren’t entirely off the menu, you know. Especially if you keep photoshopping bogus “eat me” signs onto my friends. 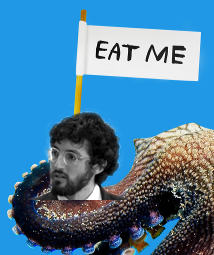 Even with electoral victories, we have to worry about being undermined by the media » « The joy of raising children