The Creation “Museum” is losing money, so Answers in Genesis is going to try and shore up profits with a renovation. It’s not looking good.

They’re going to upgrade the theater with 3-D projection. This is the theater where they currently show Men in White, a short movie that is so bad that when I visited the “museum” I only lasted 30 seconds before concluding that I wouldn’t be able to sit through it, or the gimmicky shaky seats and water sprays. Now they’re going to have plesiosaurs looming out at you as an excuse to drip water.

But the big deal they’re bragging about is that they’re going to redesign the entrance to include…new displays! Static displays with no evidence! More apologetics! I’m not feeling the urge to visit it a second time.

Wait, what’s that in the center of the exhibits? Those red balls? That looks familiar. 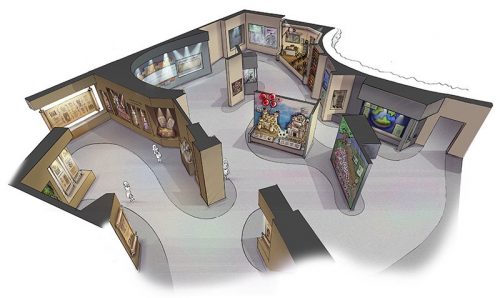 It is familiar! I’ve seen that so many times. It’s the centerpiece of many of Ham’s droning talks. 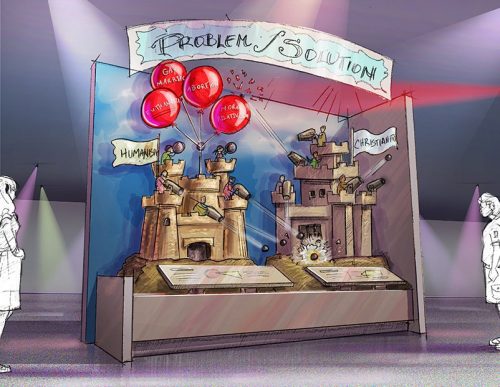 They have taken this cartoon, and plan to turn it into a 3D diorama. 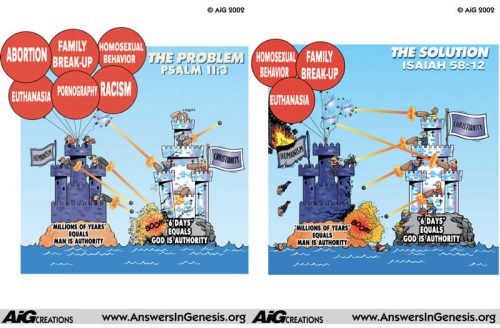 You know, this doesn’t suddenly make it more true or believable. It does discredit the “museum” even more that they think it a noteworthy addition to create a sculpture of an old cartoon by a creationist hack. Why? Was Ben Garrison unavailable?

Men have got some learning to do » « Oh, gosh, what can Matt Lauer do to redeem himself in our eyes?