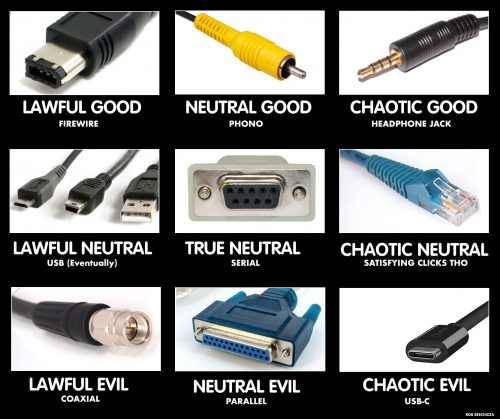 Serial cables are neutral? No way. Chaotic evil. I had to make too many of them. DB9 or DB25, or some ghastly custom pinout some manufacturer saw fit to stick on their device? I’ve encountered lots where all you need is 3 pins — ground, transmit, and receive — but even then you have to worry about whether this is a straight pass-through cable or a null modem cable. Some devices require one or several of the handshaking lines to be enabled — but different machines require different handshakes. Do you need DTR or DCD? Sometimes yes, sometimes no. Then some of those handshake lines are completely redundant, and you can make it work just fine by shorting out the line to one of the other pins.

I remember the bad old days when you’d buy laboratory devices and they’d have some odd connector hanging off the back and there’d be a cryptic pinout diagram in the specs, and you’d have to solder up your own cable for it. It was not a happy time.