Readers here are familiar with a deflection technique used by people with ugly views: they claim they aren’t promoting bad ideas, they’re Just Asking Questions. Asking questions is a good idea, right? We wouldn’t want to discourage people from questioning! Unfortunately, they always use the question as a framework for setting up alternatives that allow them to discuss their real agenda. Are women and black people fully human, or are they inferior subhuman knock-offs of the white man? Hey, don’t criticize me, I’m just asking a question here!

Now look at the kind of person Donald Trump tried to appoint to high office (we could also look at the people he successfully recruited). Anthony Scaramucci has been saying some interesting things on Twitter. 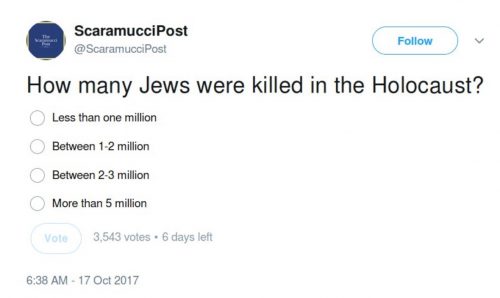 Hey, man, don’t give him no grief. He’s just askin’ questions here. He isn’t denying that the Nazis killed some Jews, he’s just thinkin’ we ought to be quantitative about it. 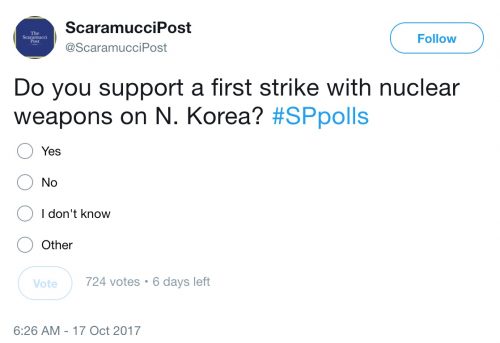 He’s not sayin’ we should murder 25 million people by setting them on fire and poisoning them with radiation. See, you can choose “no” (and most people did)! He’s just proposing some reasonable alternatives for discussion.

JAQing off isn’t the only tool in the deplorable’s toolbox. There’s also the “Just Joking” defense.

The publication also reports that Trump has mocked Pence for his views opposing abortion and LGBTQ rights.

Trump jabbed at Pence after a legal scholar told the pair that if the Supreme Court overturned Roe v. Wade, many states would probably legalize abortion.

“You see?” Trump reportedly said to Pence. “You’ve wasted all this time and energy on it, and it’s not going to end abortion anyway.”

And when the meeting began to focus on gay rights, Trump reportedly pointed to Pence, joking, “Don’t ask that guy — he wants to hang them all!”

I’m also kind of despising the “Devil’s Advocate” gambit. The people who deploy that one sure seem to spend a lot of time role-playing as Satan.