In this conversation yesterday, a common question came up: can you breed a Chihuahua and a Great Dane? It seems like it ought to be doable in one direction, if you cross a tiny little Chihuahua male to a large Great Dane female, but the question is what will happen if you cross a Great Dane male to a Chihuahua female — does the female swell up with giant puppies inside her until she looks like a watermelon with four tiny legs sticking out to the side, and then she explodes? That’s the cartoon version, anyway. I threw out my general recollection that no, fetus size is maternally regulated, so that doesn’t happen at all, but I didn’t recall any specifics, and said I’d look them up.

I did. It turns out there’s nothing but anecdotal bogosity out there on the interwebs. A lot of people cite this blog post from Ponderings from Pluto.

“It took a lot of trial and error,” said Marty Samson, a canine researcher with the University of South Texas. “At first, we tried having a Great Dane impregnate a Chihuahua, but that didn’t work: the puppies’ heads were bigger than the Chihuahua mother. We tried to deliver the puppies through Caesarian section four weeks early, but they were not viable enough to survive on their own.”

Neither the Great Mexicans/Chi-dane-danes nor their Chihuahua mother survived, leading Samson to conclude the only way to breed the dogs was to have a male Chihuahua mate with a female Great Dane.

Samson’s team had to erect a ladder for the male to climb since, even with the female Great Dane laying on the ground, his climbing on top of her was similar to an adult man having to climb a small structure.

Hey, everyone! It’s a satire site. It’s fake news. It even says so on the blog. I decided to check it out anyway, just in case. First problem: There is no such thing as a University of South Texas. There is a South Texas College, a Texas Southern University, a University of Texas Southwest, etc. But nope, sorry, we can’t ask the IRB at a fictional university to explain what they were thinking to allow this experiment.

I went further and checked PubMed, and there actually was an MD Samson who published a couple of papers in veterinary journals in the 1980s. They were not breeding experiments.

Other people cite Reddit (ugh, please). Nope, this is garbage, too. I also checked Snopes, just in case, but no joy.

It seems that either the experiment has not been done (purebred dogs are expensive, and owners are usually solicitous about breeding them appropriately; it’s also quite likely that this kind of research might be frowned upon as pointless), or it has been done and failed. It’s entirely possible that the two breeds are not interfertile. Or it may have been done, and the results were mundane and uninteresting, and not at all noteworthy.

I’m going to guess at the latter likelihood. I hit the developmental biology textbooks, and while it didn’t have the specific Chihuahua/Great Dane cross, Ecological Developmental Biology did describe a similar experiment in horses. Shetland ponies are small horses, less than 4 feet tall at the shoulder. Shire horses are huge draft horses. What if you cross them? The reciprocal crosses have been done, and no female Shetland ponies were exploded in the process. This diagram summarizes the results of the crosses. 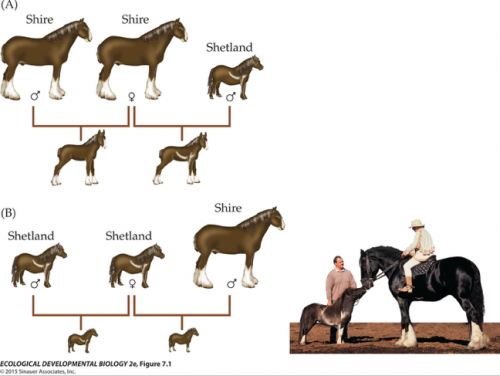 The answer is simple: fetal size is regulated by the mother, and the foals are always of a size appropriate to the maternal breed. That makes sense; growth would be limited by the availability of maternal nutrients. The size of the offspring in different crosses are also correlated with uterus and placenta size. There is also evidence from human children.

The final answer: the definitive experiment either has not been done or has not been reported in a credible source, but on the basis of other experiments, I’d predict that a Chihuahua mother would give birth to Chihuahua-sized puppies, no matter how big the father dog.

The one true Batman has died » « It’s a tried and true solution!