Everyone and their mother is sending me this story today: C-sections May Be Changing the Course of Evolution.

Rates of caesarean section are increasing in countries like the U.S. and the U.K. and a new study suggests that more and more women need the surgery because of their narrow pelvis size — a trait that evolution would, in theory, have weeded out.

For the paper, published in the journal Proceedings of the National Academy of Sciences, researchers used data from the World Health Organization and other large birth studies and determined that cases where the baby is too big for the birth canal — a.k.a. obstructed birth — have increased from about 30 per 1,000 in the 1960 to 36 per 1,000 today.

I say the paper doesn’t show a causal relationship.

Has the rise in C-sections affected human evolution? This scientist predicts yes.

Human ingenuity increasingly allows us to fight back against “natural selection” and, in effect, influence the path of our own evolution.

Take Cesarean sections, the procedure in which babies are born via surgical incision rather than through the mother’s birth canal. Some form of the procedure has been around for hundreds of years, but only in the past few decades has it become commonplace.

In the US, C-sections now account for 30 percent of all births, according to the Centers for Disease Control and Prevention. But back in 1970, that figure was around 5 percent. So while C-sections have only been widely available to mothers for just a couple of generations, already scientists are speculating that the procedure is affecting human evolution.

This scientist says probably not.

The paper itself argues for obstetric selection in humans.

Compared with other primates, human childbirth is difficult because the fetus is large relative to the maternal pelvic canal. It is a long-standing evolutionary puzzle why the pelvis has not evolved to be wider, thus reducing the risk of obstructed labor. We present a mathematical model that explains the high rates of fetopelvic disproportion by the discrepancy between a wide symmetric phenotype distribution and an asymmetric, “cliff-edged” fitness function. Only weak selection for a large newborn, a narrow pelvis, or both is necessary to account for the high incidence of fetopelvic disproportion. Because the regular use of Caesarean sections has reduced maternal mortality, the model predicts an evolutionary response of fetal or maternal dimensions, increasing the rates of fetopelvic disproportion.

Nah, not buying it.

Actually, they do do what they say: they present a mathematical model of how a disparity between head size and pelvic canal size could hypothetically lead to a selection effect, given a particular frequency of disproportion. They don’t actually measure or observe anything, though. They pull together a number of factors, like the heritability of pelvic and head size, and estimates of the frequency of serious birthing difficulties, etc., all of which show a wide range of reported values, and then put together an abstract series of calculations to show that hey, this could potentially have an effect. That’s it. Don’t panic. We’re not looking at an imminent future of bulbous-headed babies and pencil-hipped women because we’ve removed an important constraint on selection.

Without criticizing their calculations, I have to point out that their assumptions (which to their credit they do note) are faulty. You can’t assume from the frequency of Caesarian sections that there is an equivalent frequency of pelvic diameter – fetal head size disparity. C-sections are an extremely indirect measure of that parameter, one that is prone to all kinds of irrelevant noise…I mean, cultural influences.

Here, for instance, is the frequency of c-sections by country. 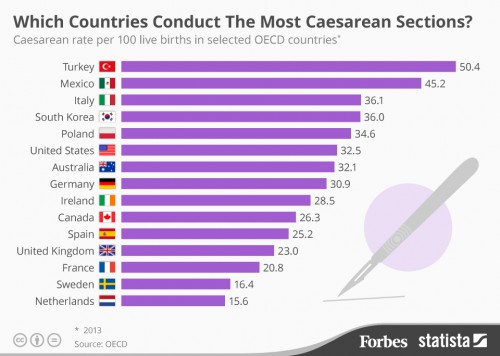 Do you think Turkey and Mexico have huge numbers of giant-skulled babies straining to burst out of their slender-boned mommas? Or that in Sweden and the Netherlands they have more pin-headed babies that slip lightly from their mothers’ gargantuan hips?

Or maybe, just maybe, some significant number of c-sections are unnecessary surgeries, and the differences represent nothing but different biases in medical practice? (However, if your doctor advises that you need one, don’t let this fact dissuade you. You might be one of the people who really, really needs a c-section.)

The World Health Organization has reported that in many countries, c-sections are done at an excessive rate, and that above a certain level, c-sections do not reduce negative effects.

Several studies have shown an inverse association between CS rates and maternal and infant mortality at population level in low income countries where large sectors of the population lack access to basic obstetric care. On the other hand, CS rates above a certain limit have not shown additional benefit for the mother or the baby, and some studies have even shown that high CS rates could be linked to negative consequences in maternal and child heath.

Bearing in mind that in 1985 the World Health Organization (WHO) stated: “There is no justification for any region to have CS rates higher than 10-15%”, we set out to update previous published estimates of CS rates worldwide, and calculate the additional number of CS that would be necessary in those countries with low national rates as well as the number of CS in excess in countries in which CS is overused.

This means that c-section frequency is a really bad proxy for a selection pressure. Note also that the United States’ c-section rate is well above the reasonable frequency. That 25% increase in the rate here probably does not represent any significant change in the degree of selection going on.

The math is nice, but it’s poorly rooted in any real biological phenomenon. Although it turns out that making predictions about evolving babies is a good way to get oodles of press.