Erin Kane notes that the campus at Ohio State has been plastered with alt-right, racist posters. I’m going to show you a few of them — they are offensively wrong.

This is an implied comparison of Australian aboriginal and white European skulls. 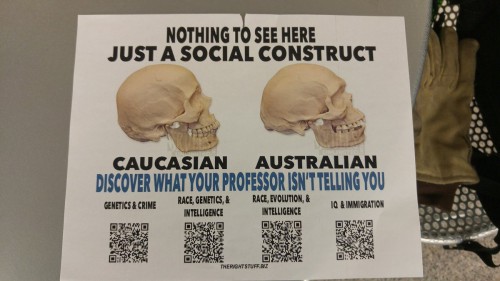 It apparently is saying that “race is a social construct” sarcastically, but whoever created this poster doesn’t seem to understand the point. There are physical and genetic differences between individuals, and some of those traits are correlated with specific populations. The point about race being a social construct is that the other associations imposed on those populations are fictitious and not based on biology or even reality. Showing me that Australian aboriginals have more prominent brows than I do does not justify oppression, nor does it support the claim that they are less intelligent or less human than me.

This one doesn’t make much sense. 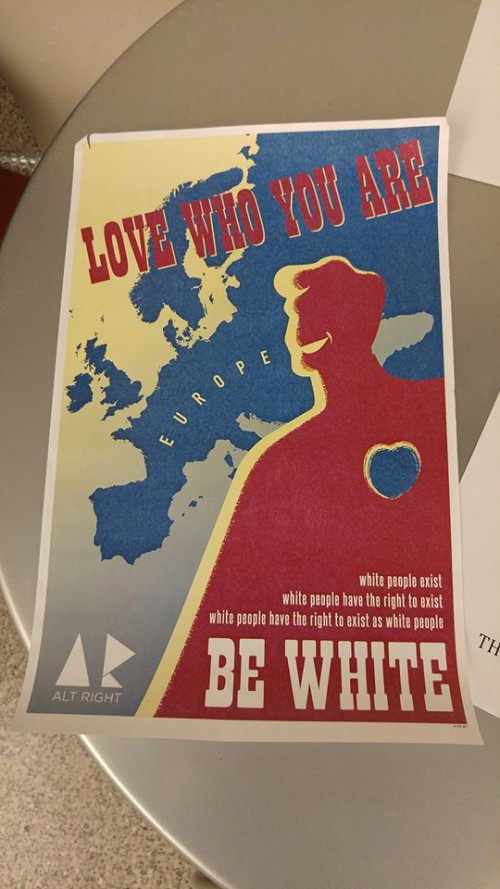 Yes, we should all be happy with who we are. No one is going to deny that there is a range of skin colors, and that light-skinned people exist and have a right to exist, but what does “white people have the right to exist as white people” even mean? What does it mean to “be white”, and why is that even an interesting goal? You could have a similar poster exhorting some of us to “be brown-haired!” or “be a tongue-roller!” and it would be as useful.

The message here isn’t that we should be proud of the fact that every one of us is the end result of a long line of genetic bad-asses who won in the competition for survival — it is instead implying that being a member of the pale-skinned group makes you better than those others. And that is simply false. Everyone has different strengths and weakness, which is why the next poster claiming that “diversity sucks” gets it so wrong.

There is such a thing as discrediting your point with a bad source. 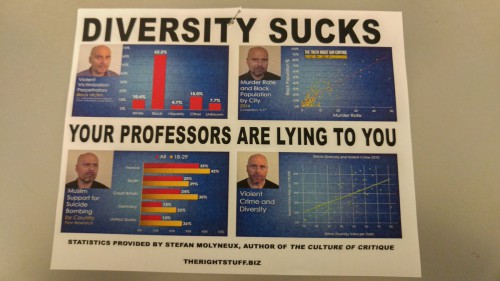 Stefan Molyneux? Seriously? You simply cannot accept anything from this amateur “philosopher” and scientific ignoramus, but there you go. I wouldn’t be surprised to learn that there are other posters going up around college campuses praising Alex Jones.

A collection for coping » « We are so screwed