A Playboy playmate, Dani Mathers, took a picture of an older woman in the shower at a gym, and then a photo of herself sniggering at her. She even took the time to caption it, If I can’t unsee this, then you can’t either, before sending it out to the public. I guess the other woman didn’t look like a Playboy Playmate of the Year, which is more than enough grounds for derision, right? 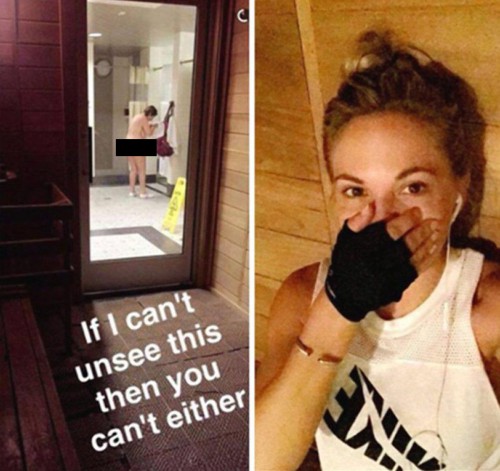 She has sort of badly apologized: she didn’t mean to make her ugly thoughts public, she intended just to share her contempt for women who are insufficiently pneumatic with a good friend. She’s now getting hammered on social media, has lost her job at a radio station, is banned forever from that particular gym, and the police have been notified. But there’s a worse punishment awaiting her.

How old is she? In her twenties? In a few years, she’s inevitably going to be in her thirties, then forties, maybe even, heaven forfend, her fifties. It’s how nature works. She’s going to get older. And as she becomes increasingly aged, that loathing of other’s bodies is going to turn inward and torture herself. The only question is how long it’s going to take before she starts exaggerating her own emerging flaws in her mind. 10 years? 5 years? Now?

It seems like cruel and unusual punishment to me, but if it’s self-inflicted, it’s her own damn fault.