The Tully Monster has been an enigma for half a century. Now it’s been reconstructed on the basis of analysis of 1200 specimens.

That thing is weird. It’s been extinct since the Carboniferous, though, so we’re not going to be catching any nowadays, unfortunately. Note the eyes on stalks; the tubby body; the long ‘snout’ terminating in a toothy jawed mouth. People have been grappling with its taxonomic identity for decades, and it’s been labeled as various kinds of worms, or a mollusc, or an odd relic of some Cambrian phylum.

The latest comparisons, though, have convincingly identified one common trace in the fossil as the remnant of a notochord — that makes it a chordate, and everything else begins to fall into place. It’s got a 3 lobed chordate brain, and gill openings, and rays of cartilage internally, and segmental myomeres. Not only is it a chordate, it seems to be a relative of hagfish and lampreys…their weird funny-looking cousin. And when you’re funny-looking compared to a hagfish, you’re really out there.

Now though, I want to know what they were doing while they were swimming about here in the Midwest 300 million years ago. What were they eating with that strange proboscis? 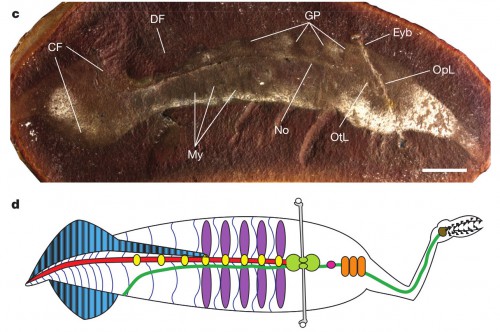