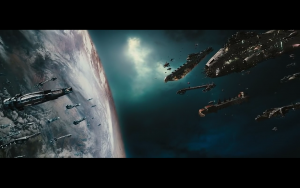 An interesting discussion of the physics of space battles brings up a lot of good points — those science-fantasy movies with spaceships flitting about ignore a lot of basic physics. Star Wars was basically WWI biplanes whirling around at speeds under 60kph, which is kind of ridiculous. But fun.

This article points out that that’s not how things would play out if ever there were a real space battle. The ships would have to obey physics and orbital mechanics, and there would be a priority on speed and acceleration and rapid maneuvers; also, explosions are kind of useless in a vacuum. So he talks about using big gyroscopes to whip mostly spherical ships around, and they’d be zooming about in complex spirals to take advantage of gravity wells.

But then he talks about crews.

I’m assuming that we’d have some intrepid members of the United Earth Space Force crewing these combat vessels. Or, at least, crewing some of them – robotic drone fighters would be a tremendous boon to space soldiers, but the communication lag between planets and vessels in orbit would make the split-second judgments of humans necessary at times.

Nah, I don’t believe it. In space battles, you’re talking about tremendous velocities, where maneuvers would slam the pilots with huge g forces. Even our atmosphere-bound fighter aircraft have problems with the limitations of the human body. How can you equip your Star Destroyer with massive gyroscopes that can flip it end over end in seconds, and not realize that using it would snap necks and turn your crew into bloody slime splattered over their cockpits?

I also don’t buy the stuff about needing the “split-second judgments of humans”. Human brains are slow. It takes us milliseconds to seconds to just absorb simple sensory output — we’re operating with a built-in lag that we don’t notice because your consciousness can’t notice that something already happened until your consciousness notices. So if the outcome of your battle depends on things only happening fast enough for human brains to process them, you’ll be dead when the ruthless cybernetic death machine swivels 10 times faster than a gooey animal body can handle, and decides to fire in microseconds, long before you perceive the new situation.

If our technology ever gets to the point where space battles can become a reality, it will also have reached a point where humans are no longer able to compete on the battle field.

Make-up tips for the new America » « He’s being silenced…SILENCED! He shouted.