Never mind, just ignore this post if you’d rather not hear about Terry Dean, Nemmers AKA Comma.

In case you didn’t know, one of the things he likes to do is photoshop word balloons with querulous comments onto pictures of little-known local officials with whom he has a beef. I am little-known and local! So why don’t I get the Comma treatment? But it seems I have. Behold, the visual vomit of a silly man: 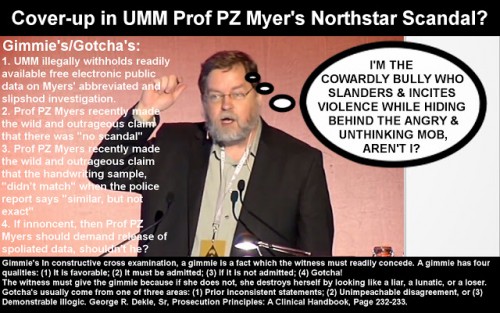 I also get email. That, also, is a rambling farrago of sick, but I inflict it on you, as he inflicts it on me.

Why would you even consider the common criminal Tracy M. Smith, Deputy General Counsel for the University of Minnesota/At-Large Member, Commission on Judicial Selection for a Court of Appeals candidate? Inquiring minds want to know, don’t they? Attorney Smith is nothing but a common criminal, isn’t she? See attached evidence. Smith has a long and sordid history of harassment and illegally withholding readily available free electronic public data from me. In fact, the only way that I received some electronic data from Smith was to inform William P. Donohue, Office of the General Counsel (612) 624-7569 that I considered him the mastermind behind the harassment and the violation of the Minnesota Data Practice Act. I also informed Donahue that I was probably going to file criminal charges against him like I did UMM Chancellor Jacqueline R. Johnson 320-589-6020. Would you like the audio recorded message emailed to you?

I am also sure that you are aware of the UMM student newspaper scandal that has haunted Prof Paul “Appeals to Ridicule” Myers. What you may not be aware of is that the UMM is currently illegally withholding the handwriting sample provided by Prof Myers and the audio statements in the abbreviated and slipshod investigation. See link for Myer’s UMM police report. https://freethoughtblogs.com/pharyngula/files/2015/01/Police-Report.pdf. Prof Myers’ police report was only released after I filed a criminal complaint against UMM Chancellor Jacqueline R. Johnson and Prof Paul Myers.

Smith second scandal is the cover up of the malicious raid of America’s Best Value Inn in Glenwood by UMM’s West Central SWAT team. The UMM’s West Central SWAT team misused local, municipal, county, state and federal resources on a wild goose chase at the America’s Best Value Inn in Glenwood for fugitve Andrew Dikken. My source indicated that the UMM’s SWAT reconnaissance knew Dikken was no where near the inn property prior to the raid. Yet, despite that fact the inn was raided. My source indicated in their audio statement that the inn lost money because of the publicity stunt. To cover this up Smith is making wild and outrageous claims that the UMM”s member were not present at the inn. Yet, Smith willfully refuses to produce the readily available free electronic public data that is in her possession to substantiate her utter nonsense.

It’s not surprising that both UMM’s Prof Paul “Appeals to Ridicule” Myers and Yellow Medicine Co. Sheriff Bill “Threat to your safety” Flaten have been forced to change their loony stories with my coverage of their scandals, is it? See below.

Smith’s malicious tactics are to misrepresent the digital audio files as audio tapes; (Note: a member of the West Central SWAT team has already emailed me audio files in DSS format, haven’t they?) sent a fraudulent bill for large sum of money for readily available free electronic public data; partially fulfilled data requests; making wild and outrageous claims that her UMM SWAT team member was not present at the malicious SWAT raid; harassing emails that drip with passive-aggressive behavior; and thinking and acting like she is above the law. Sounds like Smith is the perfect candidate for Minnesota’s lawless courts, doesn’t it?

In her discussion of the different modes of overt and covert verbal abuse, Evans (1992) lists the following types of covert verbal abuse: “withholding,” “countering,” “discounting,” “verbal abuse disguised as jokes,” “blocking and diverting,” “trivializing,” and “undermining.” Gaslighting, The Double Whammy, Interrogation and Other Covert Control in Psychotherapy & Analysis, Theo L. Dorpat (Maryland: 2004), Page 13.

I just got back from the campus police, where I was read my Miranda rights and recorded giving a statement, because the Geiger cranks have apparently made a formal complaint, accusing me of stealing their rags and adding a new charge, that I’d vandalized the latest edition, scribbling an “str” on the cover to change “right-to-life” to “right-to-strife”. So I also had to leave a handwriting sample. The Northstar Holy War continues. 28 January 2014. https://freethoughtblogs.com/pharyngula/2014/01/28/the-northstar-holy-war-continues/

Tracy M. Smith: Ms. Smith is the Deputy General Counsel for the University of Minnesota, where she is responsible for representing the University in general litigation in state and federal district and appellate courts. Previously, she was an Associate General Counsel for the University of Minnesota, Assistant Attorney in the Minnesota Attorney General’s Office, and a judicial clerk for the United States Court of Appeals for the Third Circuit. Ms. Smith volunteers for Southwest High School and previously served on the Minneapolis Public Schools Advisory Committee on Global Languages and volunteered as a teacher for English language learners at Neighborhood House. Commission on Judicial Selection Recommends Court of Appeals Candidates to Governor Dayton FOR IMMEDIATE RELEASE November 25, 2015

http://mn.gov/governor/appointments/judicial-appointments/commission-members.jsp
Commission Members Members of the Minnesota Commission on Judicial Selection are listed below. Tracy M. Smith, At-Large Member Ms. Smith serves as the Deputy General Counsel at the University of Minnesota, where she supervises litigation on behalf of the University and provides advice on employment, student affairs, privacy and data practice. Ms. Smith previously served as an Assistant Attorney General for the State of Minnesota and clerked for the Honorable Max Rosenn, United States Court of Appeals for the Third Circuit. Education: B.A. Georgetown University, Washington, DC. J.D. University of Minnesota Law School, Minneapolis, MN.

University of Minnesota President Eric Kaler fielded praise and pointed criticism following the resignation of Norwood Teague as athletic director, with Kaler’s staff scrambling at times to control the flow of information to the public. A review of hundreds of pages of correspondence and other materials requested by news organizations shows that some members of the university’s Board of Regents questioned why they did not learn sooner of the sexual harassment complaints against Teague. The documents also offer a glimpse of the intense pressure faced by Kaler and the U’s communications team after the Aug. 6 resignation. U regents say they were first kept in dark about Norwood Teague complaints In e-mails, regents say they were kept in the dark about harassment complaints. By Mila Koumpilova and Dan Browning Star Tribune NOVEMBER 24, 2015 — 9:28PM

Mr. Nemmers, The Sheriff’s Office has no public data related to this incident. The call did not come in on a 911 line. The phone calls made to our office if released would jeopardize another ongoing investigation. Also, incident you reference is a Granite Falls Police Department case. You will need to contact them directly for information related to that case. Subject: Data Request. From: Cindy Hanson, Administrative Assistant, Yellow Medicine County Sheriff’s Office. , Fri, Sep 13, 2013 at 4:41 PM.

A 911 call to the Yellow Medicine County Sheriff’s Office resulted in the search of the America’s Best Value Inn, a hotel located on state Highway 28 in Glenwood. The tip, deemed credible by law enforcement, described a man matching Dikken’s description. …“Once it was deemed a credible report, we took it seriously and followed up on it,” Danter told the Pope County Tribune Thursday afternoon. … After the hotel search, it was determined that the tip was unfounded, and Dikken was never at the hotel or even in Glenwood, Danter said Friday morning. Public tip leads to search of Glenwood hotel. 09-09-13, By Tim Douglass, Publisher. Pope County Tribune. http://www.pctribune.com

UMM student newspaper scandal that has haunted Prof Myers: What? There was no scandal, and I haven’t been haunted by anything. It’s a little peculiar that I’m accused of acting above the law because in an incident in which someone defaced some cheap racist newspapers by scribbling on them, I obliged the law by giving a handwriting sample, which didn’t match (and probably couldn’t match — it’s a pretty short scribble) Prof PZ Myers aka “Mr. Logical Fallacy” November 15, 2015.

I did note that the STR from Myers was similar, but not exact to the STR written on the front page of the paper that I had a copy of. ICR# 1400376 UMM Police Officer Rob Velde.

Poor man. I hope he gets help someday.

Something else on my plate » « Flat white