Every once in a while, I get some glib story from believers in the Singularity and transhumanism that all we have to do to upload a brain into a computer is make lots of really thin sections and reconstruct every single cell and every single connection, put that data into a machine with a sufficiently robust simulator that executes all the things that a living brain does, and presto! You’ve got a virtual simulation of the person! I’ve explained before how that overly trivializes and reduces the problem to an absurd degree, but guess what? Real scientists, not the ridiculous acolytes of Ray Kurzweil, have been working at this problem realistically. The results are interesting, but also reveal why this work has a long, long way to go.

In a paper from Jeff Lichtman’s group with many authors, they revealed the results of taking many ultrathin sections of a tiny dot of tissue from mouse cortex, scanned them, and then made 3-D reconstructions. There was a time in my life when I was doing this sort of thing: long hours at the ultramicrotome, using glass knives to slice sequential sections from tissue imbedded in an epoxy block, and then collecting them on delicate copper grids, a few at a time, to put on the electron microscope. One of the very cool things about this paper was reading about all the ways they automated this tedious process. It was impressive that they managed to get a complete record of 1500 µm3 of the brain, with a complete map of all the cells and synapses.

But hey, I don’t have to explain it: here’s a lovely video that leads you through the whole thing.

I have to squelch the fantasies of any Kurzweilians who are orgasming over this story. It was a colossal amount of work to map a very tiny fraction of a mouse brain, and it’s entirely a morphological study. This was a brain fixed with osmium tetroxide — it’s the same stuff I used to fix fish brains for EM 30 years ago. It’s a nasty toxin, but very effective at locking down membranes and proteins, saturating them with a high electron density material that is easily visualized with high contrast in the EM. But obviously, the chemistry of the tissue is radically changed, and there’s a lot of molecular-level information lost.

So the shape of the cellular processes is preserved, and we can see important features like vesicles and post-synaptic densities and connexins (although they didn’t find any gap junctions in this sample), but physiological and pharmacological information is only inferred.

But it’s beautiful! And being able to do a quantitative analysis of connectivity in a piece of the brain is fascinating. 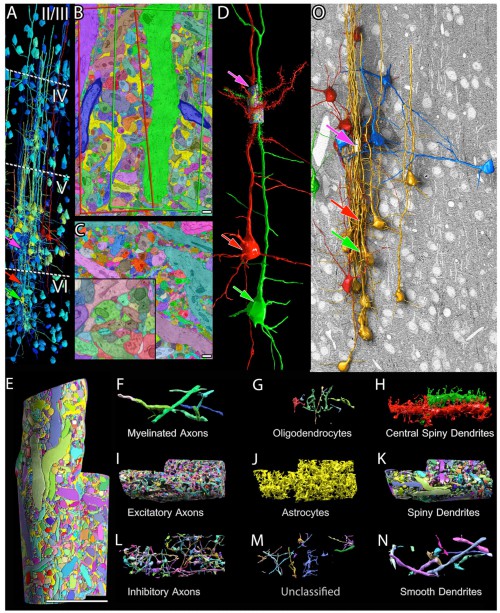 (A) Cortical neuronal somata reconstruction to aid in cortical layer boundaries (dotted lines) based on cell number and size. Large neurons are labeled red; intermediate ones are labeled yellow; and small ones are labeled blue. The site of the saturated segmentation is in layer V (pink arrow). These two layer VI pyramidal cell somata (red and green arrows) give rise to the apical dendrites that form the core of the saturated cylinders. (B) A single section of the manually saturated reconstruction of the high-resolution data. The borders of the cylinders encompassing the ‘‘red’’ and ‘‘green’’ apical dendrites are outlined in this section as red and green quadrilaterals. This section runs through the center of the ‘‘green’’ apical dendrite. (C) A single section of a fully automated saturated reconstruction of the high-resolution data. Higher magnification view (lower left inset) shows 2D merge and split errors. (D) The two pyramidal cells (red and green arrows) whose apical dendrites lie in the centers of the saturated reconstructions. Dendritic spines reconstructed in the high-resolution image stack only.

It’s also because the authors have a realistic perspective on the magnitude of the problem.

Finally, given the many challenges we encountered and those that remain in doing saturated connectomics, we think it is fair to question whether the results justify the effort expended. What after all have we gainedfrom all this high density reconstruction of such a small volume? In our view, aside from the realization that connectivity is not going to be easy to explain by looking at overlap of axons and dendrites (a central premise of the Human Brain Project), we think that this ‘‘omics’’ effort lays bare the magnitude of the problem confronting neuroscientists who seek to understand the brain. Although technologies, such as the ones described in this paper, seek to provide a more complete description of the complexity of a system, they do not necessarily make understanding the system any easier. Rather, this work challenges the notion that the only thing that stands in the way of fundamental mechanistic insights is lack of data. The numbers of different neurons interacting within each miniscule portion of the cortex is greater than the total number of different neurons in many behaving animals. Some may therefore read this work as a cautionary tale that the task is impossible. Our view is more sanguine; in the nascent field of connectomics there is no reason to stop doing it until the results are boring.

Computer security I can manage! » « I no longer support Cthulhu