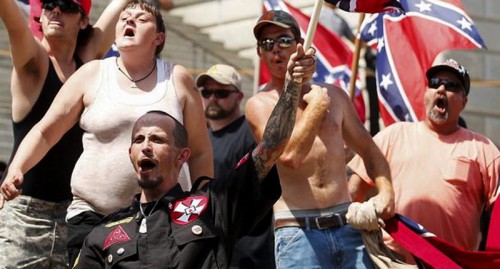 The problem is, they’re not. They’re entirely ordinary. They’re yelling, which distorts their expressions, and the real issue is that they’re dismissible because they’re shirtless, or wearing gimme caps, or have put little effort to dressing up. These are not markers of ugliness. They are markers of class.

Put these same people in suits or casual business attire, and they’d be entirely unremarkable. Take a random selection of upper middle class people and put them in those same outfits, and others would be far more comfortable calling them “ugly” than when they were at a higher socio-economic level, and everyone would be quicker to rebuke anyone who made that kind of judgment based on appearance of a wealthy person.

What they are doing is what’s awful and ugly: they are racists cheering on the Confederacy or protesting the decline in respectability of the traitor’s flag.

You want to mock what they’re doing? Here’s a better way.