This is amusing. A simple study watched people playing the game Halo, and correlated skill at the game with how they treated other men and women players. It turns out that losers tend to be more disparaging of women.

As they watched the games play out and tracked the comments that players made to each other, the researchers observed that — no matter their skill level, or how the game went — men tended to be pretty cordial to each other. Male players who were good at the game also tended to pay compliments to other male and female players.

Some male players, however — the ones who were less-skilled at the game, and performing worse relative their peers — made frequent, nasty comments to the female gamers. In other words, sexist dudes are literally losers. 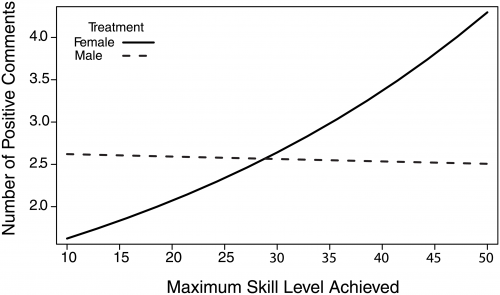 A chart from the Halo study that shows how nice male gamers were to other males (dotted line) and females (solid line) during gameplay. Men always treat each other about the same. But the better a player gets, the more likely he is to be nice to ladies. (Kasumovic et al)

I did detest part of the conclusion, though.

In each of these environments, Kasumovic suggests, a recent influx of female participants has disrupted a pre-existing social hierarchy. That’s okay for the guys at the top — but for the guys at the bottom, who stand to lose more status, that’s very threatening. (It’s also in keeping with the evolutionary framework on anti-lady hostility, which suggests sexism is a kind of Neanderthal defense mechanism for low-status, non-dominant men trying to maintain a shaky grip on their particular cave’s supply of women.)

That evolutionary argument is also in the original paper, and it’s not much better there.

We suggest that low-status males increase female-directed hostility to minimize the loss of status as a consequence of hierarchical reconfiguration resulting from the entrance of a woman into the competitive arena. Higher-skilled players, in contrast, were more positive towards a female relative to a male teammate. As higher-skilled players have less to fear from hierarchical reorganization, we argue that these males behave more positively in an attempt to support and garner a female player’s attention. Our results provide the clearest picture of inter-sexual competition to date, highlighting the importance of considering an evolutionary perspective when exploring the factors that affect male hostility towards women.

Argh. There are assumptions galore in there: that the human ancestral condition was a male-dominated hierarchy in which low-status males could obtain access to sex by oppressing women. Why should we think that, rather than that the behavior is a consequence of contemporary culture? This was a study of anonymous video game players, by scientists in Ohio. You can’t make evolutionary conclusions from that!

(Also, the lines in that graph are artificially clean: you look at the raw data, and you see a whole bunch of noise, with some losers being gracious and some winners being assholes. As you’d expect.)

Everywhere and nowhere » « Ugly is as ugly does