There’s usually no point to complaining when some odious business announces that they are “sponsoring” soft drinks or whatever — it’s meaningless. My university has Coca-Cola machines downstairs, which doesn’t imply sponsorship either way. It means we have a contract with the local distributor to service and supply the machines. So when I heard that Pepsi and the Creation “Museum” were teaming up, I shrugged. So what? They’ve got an overpriced cafe, they need to supply it with food and beverage, they’ve got a deal with a local company. Just as gay people have a right to demand equal service from their local bakery, creationists can’t be prohibited from accessing necessary services.

(Sorry, gay readers, if that sounds like I’m comparing you to creationists. I’m not, you’re much better than that.)

However, this image crosses the line. 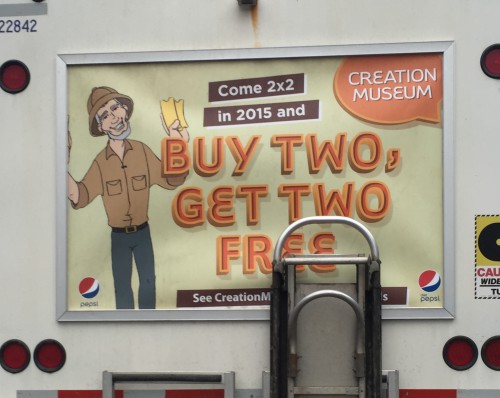 That’s a Pepsi delivery truck, advertising for the Creation “Museum”, and that’s just wrong. I would boycott them for that.

But then, who do I boycott? Look at that sign: cheap and cheesy. It’s probably not part of any corporate or national campaign, its source is probably just the regional distributor, who may well be a fan of Answers in Genesis. I guess that means if I lived in Kentucky, I wouldn’t buy Pepsi products.

But I detest Pepsi anyway (when I drink soft drinks, it’s Coke Zero), so I wasn’t about to give them any money anyway. So yay, I guess, I’ll kind of boycott Pepsi.

Dangerous and unethical » « The Sad Puppies are goddamned idiots