And every year thereafter. He hasn’t learned a thing.

Nelson showed up in the comments to the earlier post, declaring his intent to publish something to clarify the situation later today. By some miracle, he has already managed to post something today, and not in 2031. Unfortunately, it’s still complete rubbish and empty rhetoric.

As is customary, he begins with some faux flattery and wheedling and a pretense to acknowledging that his earlier efforts were failures. There is no way to calculate ontogenetic depth. He thought it ought to be easy, but it isn’t. Therefore, evolution requires foresight.

That makes no sense. He doesn’t offer any defense of ontogenetic depth 1.0, or ontogenetic depth 2.0, or any other version of his original crackpot idea, but instead offers us a problem in developmental biology, tells us that he can’t imagine an answer, and therefore his failure to comprehend is offered as evidence that evolution requires intelligent design. I thought he was supposed to have had training in philosophy, and he doesn’t see the problem in his logic?

Here’s the problem he can’t grasp, illustrated with his own diagram. Nematode early development is characterized by a series of specific cell divisions, where each daughter cell then follows a specific fate. The daughter cells are going to go on to form ectoderm, mesoderm, endoderm, etc., in a very predictable pattern that is well documented in the literature. 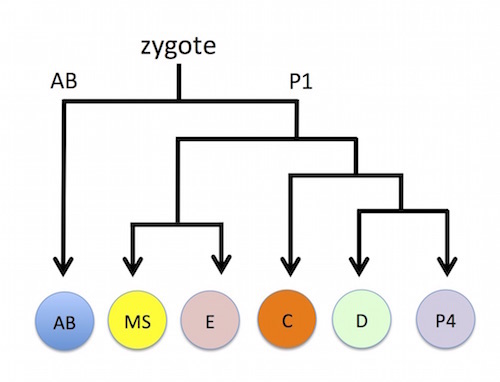 He calls this pattern CEICP, for “C. elegans initial cleavage pattern”. Then, in an exercise in absurdist reification, he asks when this specific pattern evolved. Was it late in evolution, when the worm was an organism with a thousand cells? That can’t be, he says, because what did the worm do with all of its cells before it had the division program? Was it early in evolution, when the worm was only made up of a few cells? That can’t be, because it wouldn’t need the functionality of of the pattern until it had a lot of cells.

Facepalm time. Nelson doesn’t have even the vaguest understanding of either evolution or development.

Why is he portraying the evolution of the worm as a progressive march that increases the number of cells? An early form could have had a mass of cells with relatively little differentiation, and the pattern emerged step by step as a refinement of that mass.

Why is he assuming the whole CEICP had to emerge at once? There’s a simple phenomenon called symmetry breaking that is revealed in his own diagram, and that diagram explains the whole process. The zygote divides into two different cells, AB and P1. Two cell types, at the two cell stage. Evolving the mechanism to do that is the first step, and then it can break symmetry in each sublineage to lead to more differentiation. It didn’t have to happen all at once in one organism.

Hypothetical suggestion: an early evolutionary decision would have been to set aside one population of cells, P4 or the germ line, from the somatic line. A primitive multicellular organism would have been just germ line cells in a colonial mass. Then another evolutionary step would have subdivided one of those lines into specialist roles.

Why is he assuming that C. elegans evolved progressively from simple to the complex form now? I don’t think the worm now is the direct result of increasing complexity. There’s good evidence that the nematode is partly the product of a paring away of developmental pathways — that an earlier ancestor would have been messier and less direct in its development. The specificity and precision of worm cleavage patterns now is partly the result of refinement of the mechanisms of segregation of tissue types. It wasn’t just a matter of “Hey, presto, here’s a lineage mechanism that works to precisely and reproducibly generate cell types with minimal slop.”

You would think Nelson would learn.

Before PZ’s critique, ontogenetic depth (OD) seemed pretty obvious to me. The metric could be calculated as a straightforward product in any animal species, by multiplying the number of adult cell types by the number of cell divisions, from fertilization and first cleavage onward, yielding a good estimate for comparing developmental complexity among the animals. Smaller animals with fewer cell types should exhibit a lesser degree of OD than larger animals with more cell types.

It seemed obvious to him, but he was wrong. He completely misunderstood everything, leading him to conclude he had a strong case against evolution.

Yet here he goes again, thinking he has a strong case against evolution, based on his goofy little thought experiment.

Learn from the past. Isn’t it more likely that once again, he has been misled by his preconceptions, and the most likely resolution of his conundrum for evolutionary biology lies in Paul Nelson’s lack of understanding, rather than throwing out modern biology?

Check in here next year for another episode of “Paul Nelson’s confident ignorance leads him astray again”.

Christ, not again » « Someday, it might be safe to drink coffee in Minnesota again