I usually watch movies alone. I like to go, and we have a very nice old theater here in town, but my wife isn’t really into them. There’s usually a conversation something like this at my house on the weekend…

“Would you like to go to the movie tonight?”

I get shot down more often in my requests for dates now than I ever did in high school. It’s OK, though, it’s usually because the movie playing isn’t to her taste, and I can respect that. It has to be some kind of chick flick to get her interested.

My definition of a “chick flick” is a simple one: it’s a movie I have zero or negative interest in seeing, but that a woman in my life really wants to see. The chick flickiest (Chickiest flick? Chickiest flickiest?) movie I’ve ever seen was Gibson’s Passion of the Christ — you can imagine how disinterested I was in that horror fest, but we had an Italian foreign exchange student living with us, and she very much wanted to see it. Not because of the “Christ”, but because it was filmed in her home town, so it was a way to ease her homesickness. It was actually kind of surreal: there’d be ol’ Jesus, getting flogged and the blood is flying, and she’d excitedly point out that that was her grandmother’s house in the background.

Anyway, for the last few months, my weekend invitation has gone sort of like this:

“Would you like to go to the movie tonight?”

“Is American Sniper playing yet?”

That’s also been a bit surreal. I had no interest in seeing a movie glorifying war, and my impression was that it was one of those jingoistic bloody-minded Republican propaganda films. After all, the right wingers freaked out when it didn’t win any big Academy Awards. When you see stuff like this from its fans you definitely get an impression of the content of the movie.

These are the people we worry about. That anyone would get enraged over a violent film is disturbing #AmericanSniper pic.twitter.com/gR1CDCdiXZ

But wait! Don’t think that my wife shares any of those sentiments! There’s a different reason she was interested. 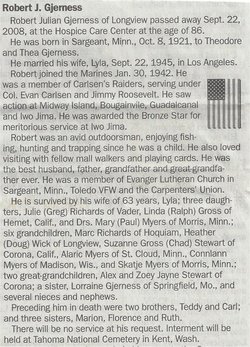 Her father was a real “American sniper”. He served in the Marines in WWII, and that was his role in the Pacific campaign — he was in many of the major island invasions, right there on the front line. There’s even a book (not a very good book, but very detailed) about his unit, Iwo; Assault on Hell (Marine Paratroopers Book 4)

, and I tell you, it’s weird reading about this vicious bloody battle with people getting blown up and shot, and there suddenly is your father-in-law’s name, and he’s engaged in all these desperate hard-fought deeds. I’d like to say I must be very brave, because I openly courted that bad-ass’s daughter, but I’d be lying.

The strange thing is that all of the veterans I’ve known — my grandfather, my father-in-law, various uncles — did not gloat about war, ever. My father-in-law didn’t have an ounce of brag in him, and would never have tried to threaten or intimidate anyone. Actually, he’d only reluctantly talk about his experiences in the war, and they’d be more likely to make him teary-eyed and sorrowful than blustery. He had a closet full of medals, and what he’d talk about instead of glory was how his friends died.

So it was a bit strange going to American Sniper. I expected it to glorify the real Chris Kyle, who was something of a braggart and a liar, in a movie that would pander to the bloodlust of right-wing fanatics. I was pleasantly surprised.

The movie Chris Kyle has all of the nastiness of the real Chris Kyle sanded off. The movie Chris Kyle reminded me of my father-in-law — regretful, doing what he had to do to help his fellow soldiers, fully aware of what a horror war was, and going into the breach again and again out of duty. The movie Chris Kyle was broken by his experiences, and there are moments when you see that clearly. He’s met by a hero-worshipping veteran, and the movie Kyle can’t meet his eyes, shuffles, and tersely mumbles a few platitudes before escaping. His wife begs him, “I need you to be human again,” and all he’s got is that thousand-yard stare.

The message is that war changes you for the worse. War accomplishes nothing; Kyle goes back and back to serve four tours in Iraq, and every time it’s a bloody dusty hell, with terrified soldiers and even more terrified civilians and horrible chaotic firefights. His friends die or are dreadfully maimed. There is no happy outcome.

I’m still surprised after seeing it that there are people who also saw it and think it is some kind of triumphal “America, Fuck Yeah!” movie. Did they also watch Eastwood’s Flags of Our Fathers and Letters from Iwo Jima and think those were celebratory?

I don’t think American Sniper was as good as his two Iwo Jima movies, though. I think it was a flaw to frame Kyle’s four tours of duty as a quest to hunt down a single sniper, “Moustafa”. I thought it was implausible, and added an easily mistaken sense of completion to his mission — one of his friends even says, “Mission accomplished” to him, and given audience responses, I think it’s clear that few got the irony. The war wasn’t going to end by shooting one guy.

The ending was also a little too pat. Chris Kyle refocused his life on his family, and becomes human again, briefly. Just like that. All his complexities and contradictions were neatly smoothed over and the repercussions of the war vanished, except for the final tragedy that just abruptly happens.

So not a great movie, but an okay one, and definitely not one that mindlessly panders to the kind of right-wing perspective that now thinks it was a movie about shooting “towel-heads”. It’s not a liberal movie either, but actually has a more thoughtful conservative position than we see represented in the Republican party nowadays.

And Australian surgeons like their reputation that way! » « It’s OK if you’re a wealthy white man