A creationist sent me this charming image to show that Nazis were evolutionary biologists. 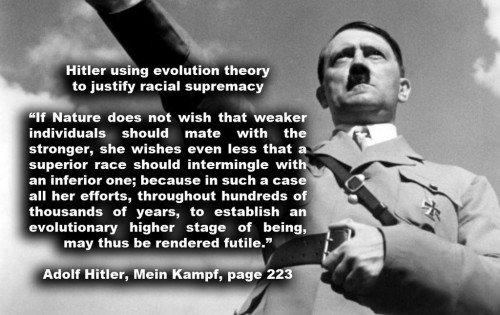 Hitler using evolution theory to justify racial supremacy
If Nature does not wish that weaker individuals should mate with the stronger, she wishes even less that a superior race should intermingle with an inferior one; because in such a case all her efforts, throughout hundreds of thousands of years, to establish an evolutionary higher stage of being, may thus be rendered futile.

Zing! That put me in my place.

But that was a little odd — I’ve read a translation of Hitler’s evil little book, and I didn’t see anything about evolutionary biology in there — there was a lot of “Nature” and “Creator” and “God” sprinkled throughout, though. So I had to go look, and yes, I found that quote in this translation (pdf). It’s in chapter XI, Race and People, and it’s full of anthropomorphization of natural processes and what I would call clearly anti-evolutionary sentiment.

This urge for the maintenance of the unmixed breed, which is a phenomenon that prevails throughout the whole of the natural world, results not only in the sharply defined outward distinction between one species and another but also in the internal similarity of characteristic qualities which are peculiar to each breed or species. The fox remains always a fox, the goose remains a goose, and the tiger will retain the character of a tiger. The only difference that can exist within the species must be in the various degrees of structural strength and active power, in the intelligence, efficiency, endurance, etc., with which the individual specimens are endowed. It would be impossible to find a fox which has a kindly and protective disposition towards geese, just as no cat exists which has a friendly disposition towards mice.

That’s an idea that would fit right in at the Creation “Museum”, but not in any biology text.

But hey, Hitler used the word “evolutionary”, so it’s fair to sling that bit of mud at biology. Not so fast, though: I immediately suspected that something was odd in the translation, so I went straight to the original German (I can read German, slowly and painfully, and it was a shame to have to exercise my rusty Deutsch reading, of all things, Mein Kampft). Here’s the passage used in the image, from the chapter titled “Volk und Rasse”.

The word translated into “an evolutionary higher stage of being” (which, by the way, isn’t an evolutionary concept anyway) was “Höherzüchtung”. That’s not evolution. A literal translation would be “higher breeding”. So it’s a very misleading way to quote it.

Furthermore, the good Christian who made that image should have kept reading. The next bit is about race mixing, and how awful it is.

…in North America the Teutonic element, which has kept its racial stock pure and did not mix it with any other racial stock, has come to dominate the American Continent and will remain master of it as long as that element does not fall a victim to the habit of adulterating its blood.

In short, the results of miscegenation are always the following:

(a) The level of the superior race becomes lowered;

(b) physical and mental degeneration sets in, thus leading slowly but steadily towards a progressive drying up of the vital sap.

The act which brings about such a development is a sin against the will of the Eternal Creator. And as a sin this act will be avenged.

Lest anyone claim that is also a mistranslation, here’s the original of that last bit:

The whole book is full of religious, not scientific, sentiment.

And so I believe to-day that my conduct is in accordance with the will of the Almighty Creator. In standing guard against the Jew I am defending the handiwork of the Lord.

What we have to fight for is the necessary security for the existence and increase of our race and people, the subsistence of its children and the maintenance of our racial stock unmixed, the freedom and independence of the Fatherland; so that our people may be enabled to fulfil the mission assigned to it by the Creator.

But if for reasons of indolence or cowardice this fight is not fought to a finish we may imagine what conditions will be like 500 years hence. Little of God’s image will be left in human nature, except to mock the Creator.

On this planet of ours human culture and civilization are indissolubly bound up with the presence of the Aryan. If he should be exterminated or subjugated, then the dark shroud of a new barbarian era would enfold the earth.

To undermine the existence of human culture by exterminating its founders and custodians would be an execrable crime in the eyes of those who believe that the folk-idea lies at the basis of human existence. Whoever would dare to raise a profane hand against that highest image of God among His creatures would sin against the bountiful Creator of this marvel and would collaborate in the expulsion from Paradise.

Yeah, sorry, Christians, but Hitler was expressing Christian and Creationist ideas in Mein Kampf. You’re free to claim that he was corrupting and distorting Christian ideals (although I could argue with that, too), but to claim he was using evolutionary biology to advance his racist ideas is simply ludicrous.