But they’re more complicated than many people assume, and even where they exist, they say nothing about how you should treat people.

I was reading Alex Gabriel’s article on the gender binary wars, and it just seems to me that a lot of people have this cartoon version of a bimodal distribution in their heads, so I scribbled up some cartoons of my own.

This is how some loud people like to pretend sex differences are distributed. It’s clear, it’s simple, and there aren’t any intermediates. The x axis of the plot can be anything: has a penis/clitoris, has a Y chromosome, likes to have sex with women vs likes to have sex with men, amount of milk secretion, ejaculation volume, whatever. We have a stereotype for how the sexes behave, and you will fit into one category or the other, because there are only two distinct elements. 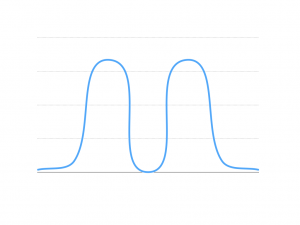 Immediately, though, there are problems. This is a multidimensional problem, and sometimes the distributions match, and sometimes they don’t. For example, if you use adult size of the genital tubercle (the structure that develops into the penis in males and the clitoris in females), you’ll see a nice bimodal distribution of sizes in the population, with one peak for females and another for males. But then the middle isn’t empty: there’s slight overlap. And worse, sometimes males who by all other criteria identify as men fall into the female half of the distribution, and females who by all other criteria identify as women fall into the male half. There is clearly a biological distinction — the peaks are real and distinct — but the middle point is not empty.

And then you have the fact that people love to claim that the biological criteria are clear-cut, but they use different criteria, and they give different answers! So using the genital tubercle criterion, you can place people into that bimodal distribution, but if you use the Y chromosome criterion, you get distributions that mostly overlap well, but then there are people whose penises put them solidly in the male part of the distribution, but their chromosomes put them in the other part, and vice versa. Where’s your mathematical clarity now?

And then what happens? Most of the signifiers we use to distinguish male and female aren’t so robust. We have bimodal distributions that are only weakly separated into two peaks. 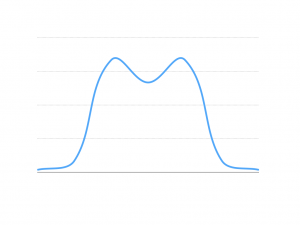 This could be a chart of height, for instance; women tend to be slightly shorter than men. It could also be a chart of hair length, where fashion has an influence. It could be a chart of performance in mathematics, in which case it may be a kind of self-fulfilling prophecy, where we mold people to fit our preconceptions. We’ve got a gigantic collection of plastic behaviors that we tend to force on people as gender signifiers: do girls really like pink more than boys, deep down? Are boys really unsuited to cooking or other domestic chores? In these cases, are these distributions a meaningful way to identify what human beings should do? No. In fact, they erode the sharpness of the entire distinction. You can be male in one characteristic and female in another.

There are a thousand different parameters we use to identify sex. It is definitely true that sex differences are real and when we average all of our matches to those parameters, most of us tend to clearly fall into one peak or the other. Most of us are, in aggregate, mostly male or mostly female.

But here’s my problem.

Let’s assume that when we look at the totality of our natures, and we plot an arbitrary index of sexual identity, we do get two clear and undeniable peaks. I think this is entirely true, even though I don’t have a formula to calculate it, and I think a lot of people would agree — the sources Alex Gabriel is discussing are all trying to identify the magic criterion that sharply demarcates male from female. So let’s pretend these advocates for the gender binary are correct and can come up with a simple way to tell who is supposed to be a man and who is supposed to be a woman, and they show that the population looks like this: 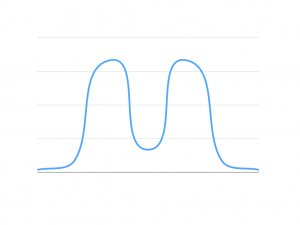 We can argue about how deep that central trough would be — maybe it’s close to zero (but we know it’s got to be non-zero; we wouldn’t even be having this argument if it weren’t for the existence of people who deny that they fit into one peak or the other), maybe it’s a large and significant fraction of the population. I don’t really care. We have people living in this red circle. 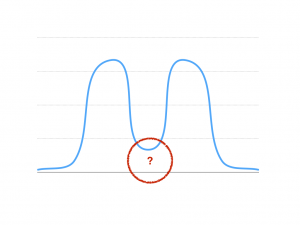 If it’s a hundred million people, who are you to say that they must be condemned and punished for making their precious bimodal chart complicated? If it’s just one person, why would you make it your mission to make them miserable for being true to their own nature, rather than yours?

I don’t even get the point of the argument. Everyone — from the trans-exclusionary radical feminists to the most egalitarian and liberal of us — recognizes that sexuality and gender are too complicated to be reduced to a one-dimensional, single binary switch. Once you’ve conceded that, you’re just bickering over the depth of the trough in the bimodal distribution, and nothing in that argument justifies treating the minority case as less than human, or compelling individuals to live in the pigeonholes you’ve assigned to them, no matter how miserable you make them. It’s not even justifiable to label them freaks, weirdos, or anomalies: they are part of a continuum of human behavior that includes every one of us.

It’s as if people are so committed to the idea that there are only two possible valid human natures that they are prepared to wish away all evidence to the contrary.

Surprise! #scio14 is next week! » « Math: the lies of atheists and humanists