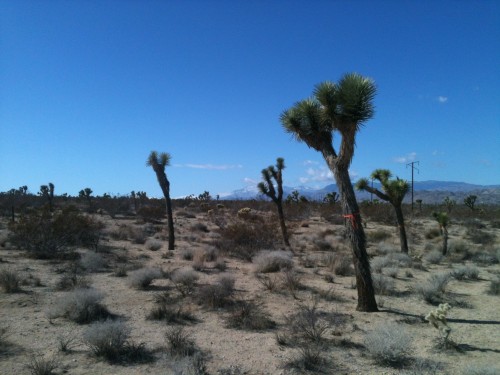 There’s a 30+-acre solar project proposed for a spot of Joshua tree woodland less that a mile from the house we’re renting here in Joshua Tree — significantly less than a mile — and I went for a walk on the site today.

My gut feeling when I heard about the project was that this isn’t the right place for it. I’m a big fan of smaller solar, and I have no problem living near a facility of that size. In fact, I’d love to live directly under a few kilowatts’ worth of photovoltaic panels. When people started calling me a NIMBY a few years back for publicly opposing some of the huge solar projects on publicly owned tortoise habitat in the Mojave, I thought “WTF are they talking about? I want this in my backyard!” Well, not a 750-foot  power tower surrounded by a hundred thousand heliostats the size of billboards, but you know. Solar. Fill the parking lots and the roofs and the bus shelters with solar panels. I want to see them everywhere I look, mostly.

But this site happens to be on a strip of land connecting our local National Park with a square mile of undeveloped land the local land trust just bought specifically due to that connection to the park, for wildlife linkage purposes. This project would cut that connectivity. It’s full of wildlife and mature vegetation. Very mature.  During my walk today I saw at least five shrubs likely more than 1,000 years old, and I wasn’t being anything like a thorough surveyor. There were tons of burrows and tons of scat, rabbit and coyote and possible bobcat. The plot is obviously well-used by wildlife. There are plenty of places in the area that would be more suitable for solar, I’m thinking. 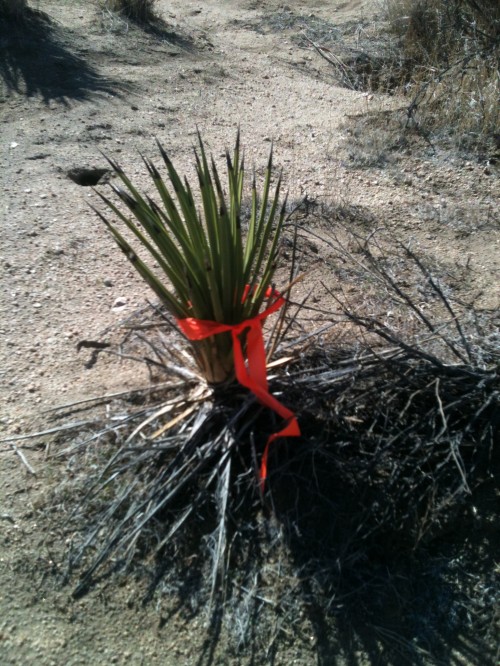 But because I do live here, and could reasonably be accused of NIMBYism — construction dust will likely blow into our yard, for instance — I wanted to scope out the site and become slightly better informed. I want to read the plans when they come out, talk to the proponents, make up my mind carefully.

So I walked around on the site for a bit.

Even the baby ones, like the 5-to-10-year-old tree at right. Just a wee cute little thing.

If it turns out that this patch of land won’t work for a solar array, then they picked the wrong place to try to push it through regardless. Aside from having an obscure but irritable desert blogger in the neighborhood, the site is right up against and upwind of a number of properties owned by relatively opinionated people, including two separate households of attorneys on the staff of a national environmental group known for its litigiousness. It may be that the developer decides to use this land as mitigation land for other nearby projects: preserving it to make up for the disturbance of less-valuable habitat elsewhere. Or maybe they’ll persuade us all that the project is right. We’ll see.

But what I found on the site this morning doesn’t bode well. 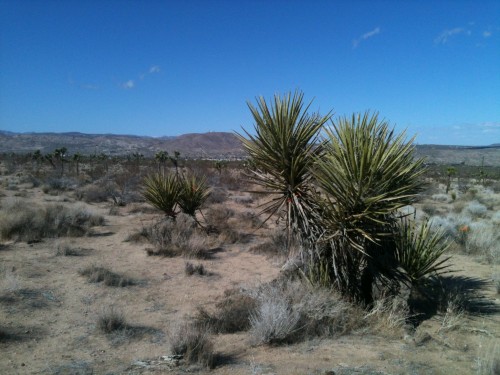 These two yuccas, in right foreground and center mid-ground, were tagged by the crew during Joshua Tree Tagging Day. You can see the tags if you look closely. Can anyone tell me the problem with that?

They’re not Joshua trees. They’re Mojave yuccas, Yucca schidigera rather than the Joshua tree’s Yucca brevifolia. They are roughly similar to a Joshua tree, enough so that tourists will call them by the wrong name. For anyone who’s worked with desert plants for even a little bit of time confusing the two is like mistaking an aardvark for a giraffe.

I found three Mojave yuccas tagged as Joshua trees. They weren’t tagging Mojave yuccas as well, because there were hundreds on the site, from babies to matriarchs, not tagged at all.

This doesn’t bode well for the solar developer’s knowledge of actual conditions on the ground. Protip: when hiring consulting field biologists, make sure they don’t claim to have graduated from the Larry The Cable Guy School of Biologism.

A paltry creationist effort » « Come on, Ken, you can say it