I’ve been witness to some really entertaining displays of ecological and scientific illiteracy over the past few days, all because I wrote about one particular species of efficient, effective predator — shown below the fold so as not to offend delicate sensibilities. 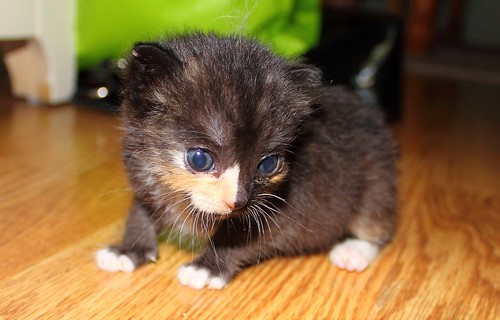 It went like this: On Monday I found a catted cactus wren in my yard that was missing tail feathers and an eye, and seemed to be going into shock here and there. It ate most of a tomato I’d given it, then disappeared. I haven’t seen it since. I wrote about it at KCET, with the usual admonition that people really ought to consider keeping their kitties inside where possible so that the ecological damage they do can be confined to your sofa, and to the odd plastic bag full of soiled litter heading to a landfill. And the process of getting cows and tuna into little cans. And entire Canadian forests cut down and pulped to print treacly calendars on.

I know better than this. I’ve written about the outdoor cats issue before, and as I said in the article, I know people come unglued when you suggest that keeping the cat inside might not be as “mean” as letting your cat wander around and kill things. Doesn’t matter how much you qualify it, how much you talk about cats you’ve loved, how much you say that not everyone can keep cats inside all the time on account of allergies and other concerns. Certain people come unglued.

There is room for sensible disagreement and discussion on the issue. For instance, take a comment by biologist Madhu Katti in a thread on my Facebork page:

My research on the behavior of birds in cities also suggests that most adult birds don’t really worry about cats too much – at least in species that figure out how to make a living in the city. Yes there are species that are more vulnerable in some places and in some circumstances, and in general it is good to keep cats indoors, but I think there is overreaction on both sides with relatively poor evidence.

I could quibble about disproportionate effects on nestlings and on ground-dwelling species, but the suggestion that evidence is poorer than we’d like is definitely true. I’m also reasonably sympathetic to statements by people who know it’d be better to keep their cat inside but just can’t tell their little beasts “no.” I do understand that, despite the fact that I would never let my cat push me around like… sorry. Just had to jump up and feed someone dinner right away. Where was I?

Anyway, there was some substantive discussion. But there was also this:

the domestic cat is needed to keep the native population at the right sustainable eco level. Lizards rodents and birds can over populate and cause flowers and fruit trees not to pollinate.

Oh Yeah! Like a domestic house cat can screw up the ecosystem! NOT! They get rid of mice and rats. Let them out so they can be themselves. Bet these are the kind of owners that have their claws amputated too.

No,they’re NOT murderers,they are natural born predators,just like any other member of the Feline species.My cat’s 9 years old,she’s been hunting for years,I can’t keep her in the house,it’s nxt to impossible.I don’t like her to hunt birds,and other precious creatures,I feel awful whenever she brings a dead whatever to our door,but what am I to do,wrestle it away from her? Yeah,when pigs fly! Lol Sorry,the way I see it,cats will be cats,dogs will be dogs,we just have to let nature take it’s course,God still rules the Universe,last time I checked,and He knows a lil somethin about how to manage the creatures and the earth’s ecosystem,after all, He created them…

The best one, though, came this morning when USA Today — dutifully following my lead, as they ought — published a surprisingly balanced article on the related issue of feral cats and their effect on wildlife. A feral cat activist referring to himself as “Vox Felina” left a well-rehearsed comment on the USA Today article, but saved what he really felt for his own Facebook page:

I wish these people cared about science. Talk about emotion, they have no science on their side. Even the very basic principals of Darwinism are against them. Where do they find these flunkies? They must see too many Tweety bird cartons as a child and irrationally demonize cats.

I’m guessing the “principals of Darwinism” this intellectual gift to humanity cites are not Biology Magnet High School Administrators, but rather refer to the whole survival of the fittest trope. Why that wouldn’t then excuse feral cat control by humans, who are, at least on paper, craftier and more powerful than feral cats, I do not know.

Seriously?? Cats destroy eco system ? Clarke is just another educated idiot wading through the shallow end of the gene pool.

There are a few tentative lessons that I think could be taken from my inadvertent exercise in stirring up the rabble:

That last is a little daunting, given that my business plan for the rest of my life is pretty much “write about what’s actually happening out in the environment and get paid for doing so when possible.” Though perhaps they’re not my real target demographic.

Hasn’t changed a bit in half a millennium » « What happened next?