It always seems to be the case that there are gaps in the fossil record just where things get interesting — probably with good reason, that forms in transition will be relatively rare. One such gap is the period where insects first emerge and begin to conquer the terrestrial world, a period called the arthropod gap, between 385 and 325 million years ago. Here’s a new specimen from that relatively barren stretch of time, Strudiella devonica. 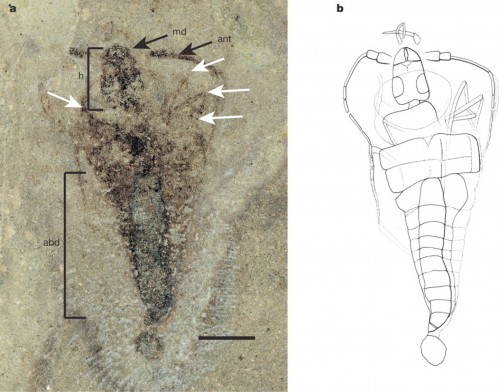 It’s a classic insect: a body divided into three regions (head, thorax, abdomen), six legs, a fairly general set of omnivorous mouthparts. It lacks wings, but the small size suggests it may be in a nymphal stage (also, the genitals at the tip of the abdomen didn’t make it), so that may not mean much.