We do not have a rational drug policy. There are potent and dangerous drugs that are socially accepted because hey, we’ve always drunk alcohol and smoked cigarettes, while there are milder, far less dangerous drugs that are damned because they’re new and unfamiliar. And so we throw people in prison for long jail terms if they are caught with some marijuana, while people can go out every weekend and drink themselves into an abusive, obnoxious state, and we just tell them they’re cool.

It is possible to take an objective look at the effects of various drugs on individuals and society, and ask “where’s the harm?” Here’s an example, the dangers of an array of drugs characterized and ranked. 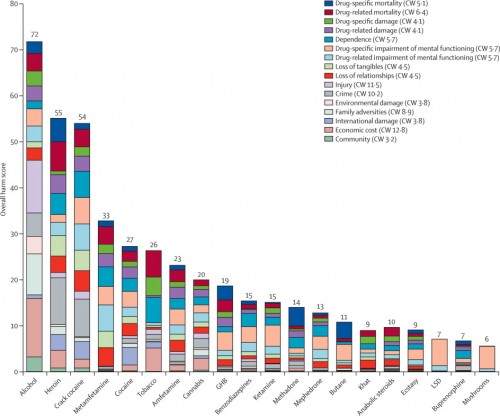 There’s lots of small print there, so you may have to click to embiggen, but I can tell you what the extremes are: alcohol is the worst, and psychoactive mushrooms are the least. Heroin and meth are bad, LSD and Ecstasy are among the least dangerous.

And there are good biological reasons for this ranking.

The particular type of neurotransmitters that a drug affects in the brain has a huge impact on the harms the drug can contribute to. A major similarity between the drugs that tops the list above is that these drugs, in addition to other areas in the brain (click here for a discussion), directly affect the dopaminergic “reward system” in the midbrain. This area has been shaped and “designed” by millions of years of natural selection in mammals to reward for adaptive behavior such as sex and the intake of nutritious food. When they are artificially stimulated by drugs such as heroin and crack cocaine they have adverse consequences for addiction and health (that is the reason why drugs such as nicotine and heroin have the characteristic addictive effects). Drugs at the bottom of the list, such as MDMA (ecstasy), mushrooms and LSD stimulate mainly serotonergic neurons (several places in the brain), and does not directly stimulate the mesolimbic reward systems (which is why they are not addictive).

Wouldn’t it be interesting if we had laws and penalties that were actually informed by science, rather than fear and naivete?

I will add, though, that there’s more to this than just biology: there are the sciences of sociology and pyschology that have to be taken into account. We’ve done the experiment of trying to criminalize alcohol in the same way we do heroin; it didn’t work.

Pharyngula Podcast #2: The silly things those creationists say » « Why I am an atheist – Danielle