Some species of cephalopods are incapable of concealing their sexual history. The males produce packets of sperm called spermatangia that they grasp with a specialized arm that they then reach out and splat, poke into their mate. In Octopoteuthis deletron, a deep-sea squid, these spermatangia are large, pale, and distinctive, so every time a squid is mated it’s left with a little white dangling flag marking it — so sex is like a combination of tag and paintball. The males are loaded with ammo — 1646 were counted in the reproductive tract of one male — and the spermatangia can be counted using a video camera.

So a ROV went down deep into the Monterey Submarine Canyon and documented the profligate promiscuity of these squid. The females had been busy: individuals had between 21 and 147 spermatangia dangling from them. 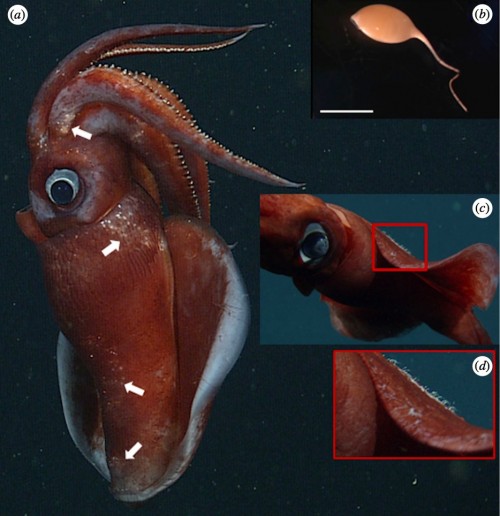 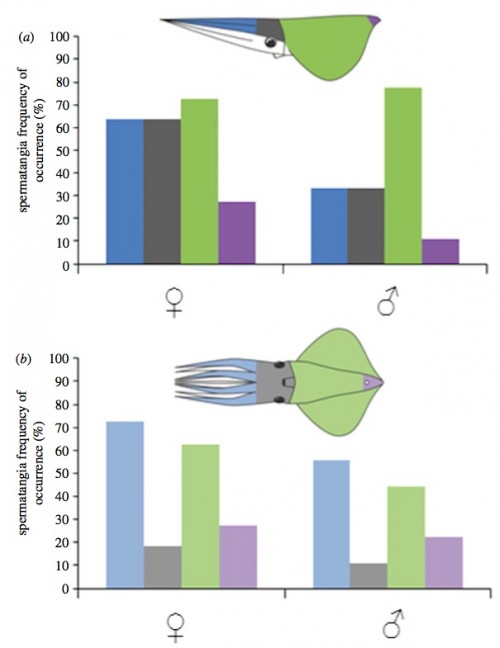 Most cephalopods, this species included, live short lives and the perpetuation of the species relies on rapid, successful mating. The authors explain this same-sex mating behavior as an adaptive response to a life-style in which discrimination is less important than simply getting the job done.

We have only observed them as solitary individuals. The combination of a solitary life, poor sex differentiation, the difficulty of locating a conspecific and the rapidity of the sexual encounter probably results in the observed high frequency of spermatangia-bearing males in this species. Apparently, the costs involved in losing sperm to another male are smaller than the costs of developing sex discrimination and courtship, or of not mating at all. This behaviour further exemplifies the ‘live fast and die young’ life strategy of many cephalopods.

I prefer to think of it as a brief happy life spent writhing constantly, passionately in the arms of love.