At first I thought this discovery was really cool, because I love the idea of ancient giant cephalopods creating art and us finding the works now. But then, reality sinks in: that’s a genuinely, flamboyantly extravagant claim, and the evidence better be really, really solid. And it’s not. It’s actually rather pathetic.

It consists of the discovery of ichthyosaur vertebrae lying in a flattened array. They look like this. 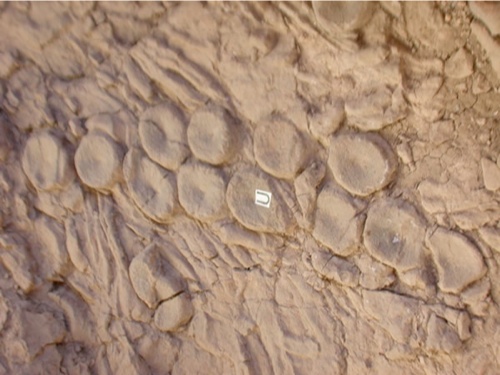 This work was presented at a meeting of the GSA under the title “Triassic kraken: the Berlin ichthyosaur death assemblage interpreted as a giant cephalopod midden”, with this argument:

“It became very clear that something very odd was going on there,” said McMenamin. “It was a very odd configuration of bones.”

First of all, the different degrees of etching on the bones suggested that the shonisaurs were not all killed and buried at the same time. It also looked like the bones had been purposefully rearranged. That it got him thinking about a particular modern predator that is known for just this sort of intelligent manipulation of bones.

“Modern octopus will do this,” McMenamin said. What if there was an ancient, very large sort of octopus, like the kraken of mythology. “I think that these things were captured by the kraken and taken to the midden and the cephalopod would take them apart.”

In the fossil bed, some of the shonisaur vertebral disks are arranged in curious linear patterns with almost geometric regularity, McMenamin explained.The proposed Triassic kraken, which could have been the most intelligent invertebrate ever, arranged the vertebral discs in double line patterns, with individual pieces nesting in a fitted fashion as if they were part of a puzzle.

Even more creepy: The arranged vertebrae resemble the pattern of sucker discs on a cephalopod tentacle, with each vertebra strongly resembling a coleoid sucker. In other words, the vertebral disc “pavement” seen at the state park may represent the earliest known self portrait.

Let me explain something here. This “Triassic kraken” has not been found; no fossils, no remains at all, no evidence of its existence. It is postulated to have been large enough to hunt and kill ichthyosaurs, which is remarkable—comparison to modern giant squid is invalid, since they are prey of whales, not predator. This fossil bed is being over-interpreted as a trace fossil, with the bones arranged by intent, by an intelligent cephalopod, which they have not seen. Furthermore, a line of discs is being seen as a picture of a cephalopod tentacle, classic pareidolia. This is trivial: dump a pile of Necco wafers on a table, and I’ll see a picture of squid suckers. This is a whole series of tenuous and unlikely speculations stacked together to make an ultimately ridiculous hypothesis.

After I read the abstract and realization settled in that this was nonsense, something else was nagging me. That name, McMenamin — I’d heard it somewhere before. A little search, and there it was: I’ve encountered him tangentially before. He’s the geologist who so effulgently endorsed the imaginative pattern-spotting of Stuart Pivar. He also claims “that mariners of ancient Carthage made it to America long before Eriksson and Columbus, some time around 350 BC.”

I think I would concur with the idea that Mark McMenamin is exceptionally imaginative.