I can’t say that I’m very keen on this lawsuit by American Atheists opposing the “9/11 cross” in some museum in New York; I can understand that in principle it’s promoting religion, and I look at that random chunk of steel that forms a crude cross and can see that it is abysmally stupid to consider it a holy relic, but man, if atheists have to police every single act of stupidity committed by the human race, we’re going to get very, very tired. We need to pick our battles better, and this one is just plain pointless.

Except for one thing: look at the response it generated when aired on Fox News. EIGHT THOUSAND DEATH THREATS from arrogant Christians. Here’s just a sampling. 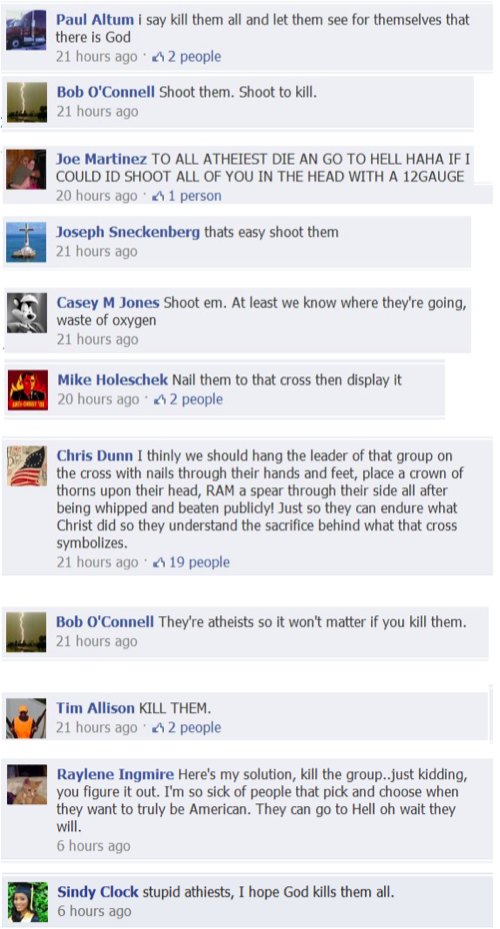 I have a recommendation for American Atheists.

Back off on the lawsuit. Come right out and tell the world it’s your error, it’s clear the serious objections to memorializing a fragment of metal that has the simple shape of a cross will not be considered in a rational way, and instead point to these insane, hateful messages from Christians. Point out that you can step away from a divisive issue on the recommendations of many of your constituents, but that Christianity clearly has little to distinguish itself from the terrorists who committed the Trade Towers atrocity: religion turns people into ravening monsters who abandon common decency to defend their bogus tribal mythology.

That people can stupidly fall for pareidolia (and trivial pareidolia at that; that pieces of metal would be connected at right angles in a modern building has zero significance) is not a surprise or a major revelation. That they can defend their misbegotten perceptions with threats of murder and rape is a more important issue.