One of the few downsides of moving to Glasgow has been that for all it’s farther north than I’ve ever lived before, there’s not much of a winter to speak of here. Last year I’m not sure we had more than two or three days in a row below freezing, and places that want that “white Christmas” feel generally have to rely on some kind of fake snow. The real stuff falls sometimes, but I’ve yet to see more than a centimeter or two, and it doesn’t stick. This winter has been a bit chillier, and a recent snowfall actually stuck around for a bit, at least where the weak winter sun had trouble reaching.

The thing is, Raksha The Perpetually Concerned is, among other things, part Husky. She suffers in hot weather, and absolutely loves the snow. In Boston, this meant she had a hard time during the summers, and in the winter, she would roll in the snow every chance she got. As spring approached, she’s start trying to roll in the gritty, gray piles left by the snowplows, after all the other snow had melted. It was a rather pathetic spectacle, but I was comforted, with the experience of many dog lifetimes, that the snow would return again in due course.

Scotland has been different. The summers are much cooler, and that has been wonderful, both for Raksha, and for myself. Tegan is… less happy with it, but she also appreciates not having the oppressive heat of a Boston summer. The lack of snow in the winter has been a little sad, for Raksha in particular, so it was nice to have the chance to get her out in a snowy field, even if the snow was a bit thin on the ground. 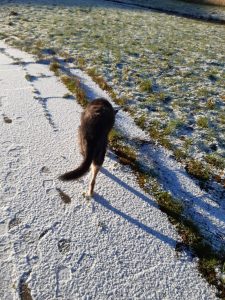 Powder snow under her feet! It’s been ages since she’s felt this! 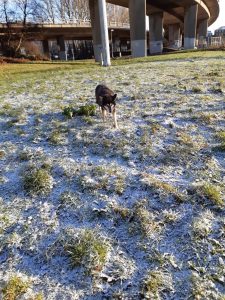 Tragedy! The grass and soil are frozen in a strange and crusty surface that crumbles underfoot. It LOOKS like snow, and it SMELLS like snow, but it feels strange and wrong. Romping is not an option, only nervous creeping over the unstable ground. It’s still very exciting though… 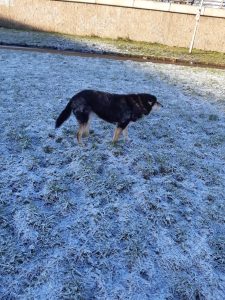 Excitement! While investigating the shade on the other side of the path, she noticed a PERSON! A person walking TOWARDS her! The months of isolation have been a bit difficult for an old dog accustomed to fairly regular house guests and interacting with strangers out and about. Maybe this is some welcome social contact? Better increase the odds by looking as fuzzy as possible! 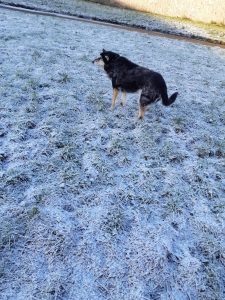 Disappointment! The stranger was not interested in petting the dog! He was on his way somewhere, and focused mostly on his prayer beads. Resigned, she watches him in case he changes his mind, but he does not. 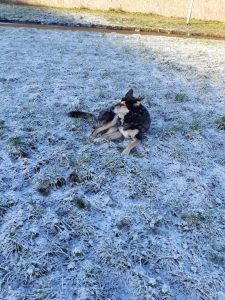 Resignation. The stranger is gone, taking her hopes with him. She laid down on the ground with a groan, and sat there, sniffing the breeze and pointing her ears at noises happening around her. One of the advantages of having ears that big is that they move mostly independently from the rest of her head, so she can multitask in this manner. At least the snow feels good on her fur. 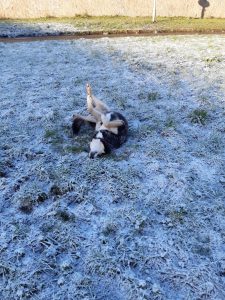 The lack of human interaction was sad, but in the end she remembered that she had snow to roll in, and attended to that duty with gusto. It’s been a long year, and I think she’s had a harder time with isolation than I have, but the snow was a treat, even if the ground under it was less solid than she’d like. I don’t know what 2021 will bring. My household is being forced to move, due to visa problems, which is excitement that we could do without. That said, moving from Scotland to Ireland will be easier than the move from the U.S. to Scotland, I hope we can return here. This ugly apartment complex has honestly been a wonderful place to live, and cheaper than anything in Dublin is likely to be. On the other hand, life is all about the experiences one can have while living, and I’ve never been to Ireland, outside of the limbo of an airport between flights. Hopefully 2021 will be better than 2020.

This blog is currently my only source of income. If you’d like to support the work I do, feed my dog, or help offset the costs of our upcoming move, please head over to patreon.com/oceanoxia, and join the Oceanoxia collective. My patrons have kept my household fed and housed during this crazy year, and while I’ll continue looking for wage labor, I really like writing for you all, and would love to be able to continue dedicating most of my time to that endeavor. If you have the means and the desire to do so, please give according to your ability, that I might survive, according to my needs!

Some thoughts on the events of January 6th, 2021 » « A Martian Odyssey: The thrilling conclusion!