The Osborne 1 was the first transportable business computer, though it certainly wasn’t portable.  At 10kg, it was as heavy as a suitcase and should have had wheels built into the casing.  It did not have a battery, so it could only be used in situ, with the power cord plugged in.

Having said that, the Osborne 1 was a full-fledged computer, as powerful as any desktop PC of the day.  It used the CP/M operating system and could run many powerful applications of the day: CBASIC, dBase II, SuperCalc, and many others that came bundled with the machine.  With a Z80 processor, 64kb of RAM (128 on the later model), two 360kb floppy drives, a 80×25 text screen, and ports for external connections, it wasn’t lacking for power.

What Osborne did lack was good management and an affordable price.  US$1800 was exorbitant, even for IBM.  The company overextended itself which (along with the IBM PC’s dominance of the market) led to the company’s collapse in 1984.  It was a short but wild ride. 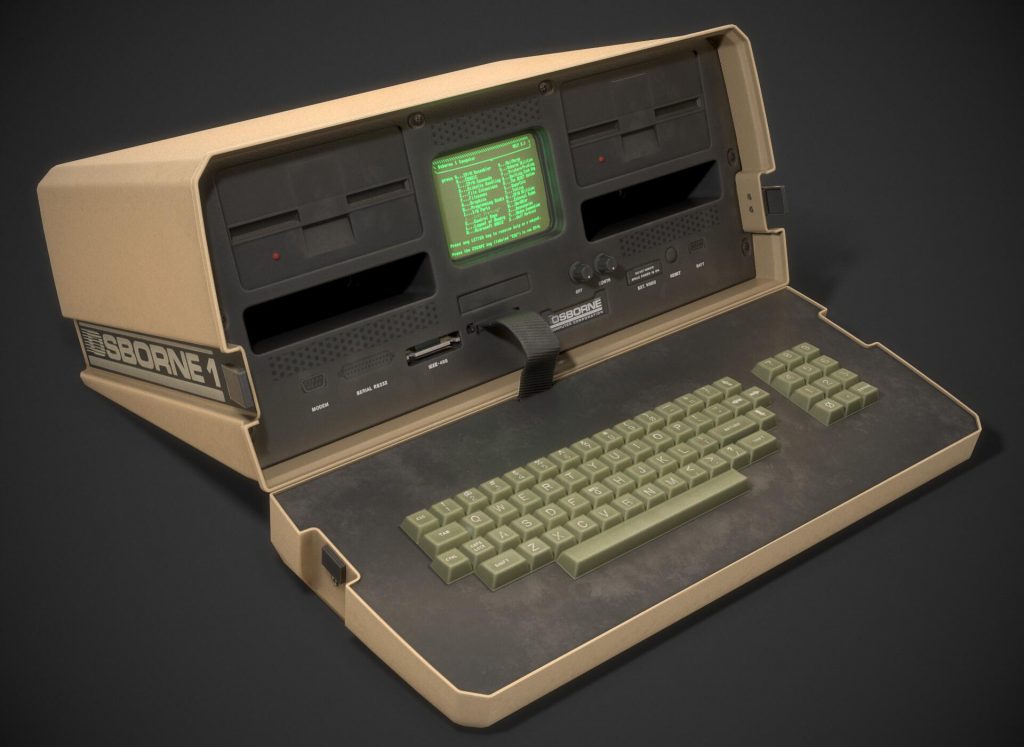 Here are a few items on the Osborne 1’s place in history:

History-Computer: The History of the Osborne 1

ZDNet: The Osborne 1: A pioneer in more ways than one

The 8Bit Guy did a two part restoration of an Osborne 1, part 1 and part 2.

The Eighties are also remembered for the obsession many had with fitness and bodybuilding, at those times. And indeed the guy carrying his Osborne 1 “portable” microcomputer in this advertisement must have had a very trained arm to swing the over 24 pounds of plastic, metal, and silicon of the Osborne with a smile.

Designed by American engineer Lee Felsenstein, the Osborne 1 is widely considered the first portable personal computer ever (the IBM 5100 anticipated it by six years but was so outrageously expensive that it’s hard to call it really “personal”*). It had been also the only one produced in high volumes by San Francisco-based Osborne Computer Corporation during its brief life, from 1980 to 1985.

Presented in 1981, the Osborne 1 – which was clearly inspired by one of the many seminal projects developed at the Xerox PARC in Palo Alto, namely the Xerox NoteTaker – was not a laptop (it didn’t have an internal battery) but a computer which could be rather easily moved from one place to another; say, from a businessman’s office in Manhattan to his weekend home on Martha’s Vineyard…

The machine was based on classic Z80-CP/M architecture, with a 4MHz Zilog Z80 processor and 64KB of RAM, and was bundled with a comprehensive software pack which included a word processor, a database, and a spreadsheet. The software bundle was stored on single-side floppy disks, since the machine, like most computers of the time,  didn’t include a hard disk drive.

Sometimes it pays to be the first and lead, other times it’s better to follow and learn from others’ mistakes.  Osborne clearly was the leader in the second sense, making the mistakes that others didn’t.  Still, we wouldn’t have portable computing or laptops without someone showing that it’s possible.  Give credit where it’s due.

Genomes Generated: Is this the first synthetic life? » « Easter Sucks: Maybe this is too personal, but what the hey….