On Saturday, my appointment with a tattoo artist finally arrived.  I have a handful of ideas I want to get over the next year, the two most important will be the next ones.  I had considered getting more tattoos before now, but not done much about it.  Now that travel isn’t possible, I might as well spend money and recuperation time on this.  (Next weekend I’m off to Kaohsiung for Taiwan’s third pride parade, the only travelling I’m doing this year.)

On my left shoulder is the p/g logo from Rush’s 1984 album, “Grace Under Pressure”. The album is bleak, recorded not long after Reagan’s idiotic “we have outlawed Russia” speech (likely the inspiration for the album’s opening track, “Distant Early Warning”).  The second track “Afterimage” is about the death of a longtime tour employee and friend Robbie Whelan, the third about survivors of death camps (after Neil Peart talked with Geddy Lee’s mother, a survivor of Bergen-Belsen and then Auschwitz), the fourth “The Enemy Within” (part one of “Fear” trilogy).

But it’s also an album of defiance, the theme of not giving up running through it (especially in the fifth song “The Body Electric”; 1001001!).  The phrase grace under pressure is attributed to Ernest Hemingway, his definition of courage.  I would rather have a phrase from a Canadian author, but neither Pierre Burton, Farley Mowat, nor others were used on Rush records.

I have found a good, clear black and white image of the clock from “Clockwork Angels” (the symbols and clock hands, no colours).  I’m planning a 20cm or 24cm diametre tattoo of the clock on my lower back.  I don’t want a “star man” tattoo, it’s overdone and it references Ayn Rand (ugh).  “Clockwork Angels” is a concept album based on Voltaire’s novella, Candide. 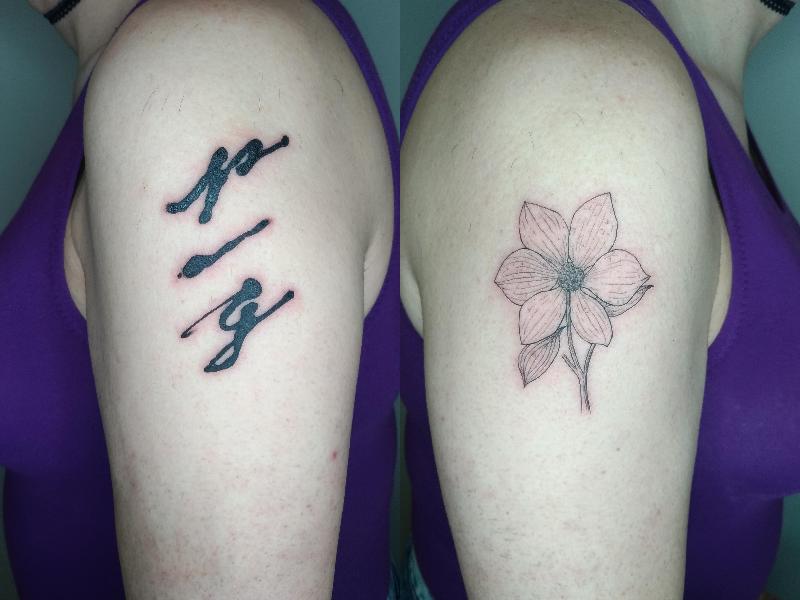 On the right shoulder is the Pacific Dogwood tree (Cornus nuttallii).  They’re considered leaves, not a flower, but most people won’t stick around for the explanation, so I don’t try.

The dogwood tree grows all over the northern hemisphere: across Asia (including Taiwan), Europe and North America. But every other species has two, three, four or five leaves.  Only the Pacific Dogwood has six.  It’s found in southwest British Columbia and along the US west coast (down to the northern quarter of California).  It’s also British Columbia’s provincial flower (again, no point in arguing).  BC is still home to me, even if I haven’t been back in nineteen years.

I thought plants were a way to say where someone was from without being controversial until I met a Serbian who lives here and talked about it.  He said Serbs, Croats and others in the region still argue about which land belongs to whom, and unique plant life could be a source of argument.  Good thing I’m not from there.

Am I talking tough if I say I fell asleep while the dogwood was being tattooed?  I usually fall asleep when I get a body wax.  The woman who owns the waxing studio has to prod me to turn over or change positions.

They Live On: One biography and one obituary » « I Jest: A modest proposal