Jimi Hendrix died on September 18, 1970, fifty years ago.  He was only 27.  And yet despite how short his life and the length of time that has passed, his influence and music still resonate.  I was three when he died so I had no knowledge of the world, but I grew up with a generation of music and musicians influenced by him.

Hendrix’s music and career mirrors Robert Johnson who died 82 years ago, also age 27. Hendrix recorded only four albums (three studio, one live) and Johnson wrote only 29 songs.  And yet, the influence and shadow both cast over popular music of the last century is larger than nearly everyone else.

Many retrospective obituaries on Hendrix have appeared this week: Deutsche Welle, The Atlantic, Guardian, among others.  Benorce Blackmon (of Charles Wright & the Watts 103rd Street Rhythm Band) reminisced about having Hendrix as his guitar tutor.  The Sydney Morning Herald has an inteview with Dr. John Bannister, the Australian doctor then working in London who tried to save Hendrix’s life.

The tragedy is that we never heard what was to come.  Hendrix had attracted the admiration and attention of Jazz legends Miles Davis and Gil Evans.  Hendrix had always played by ear and came from a Blues and Rock background.  But Evans taught him how to read music, and the two talked about working and recording together.  Sadly that never came to pass.  Imagine the sparks.

Ultimate Classic Rock has a list of quotes attributed to Hendrix worth reading.

“I think religion is just a bunch of crap. It’s only man-made stuff, man trying to be what he can’t. And there’s so many broken-down variations, all trying to say the same thing, but they’re so cheeky, all the time adding in their own bits and pieces. Right now, I’m working on my own religion, which is life.”

“[T]hat’s what the establishment’s waiting for, for people to start fighting against their own selves, like for instance black against white, yellow against pink and all that. But that’s not the idea of the thing. … The idea is against the new and the old, and the establishment causes this by playing games, by turning different colors against each other to make the younger generation weak.”

“There’s no such things as age brackets; not in my mind, ‘cause a person’s not actually old in numbers of years, but how many miles he’s traveled, you know? How he keeps his mind active and creative.”

A very popular comparison of quotes appeared a few years ago.  It’s not hard to guess where I stand on the issue (i.e. if you’re not playing instruments, you’re not a musician). 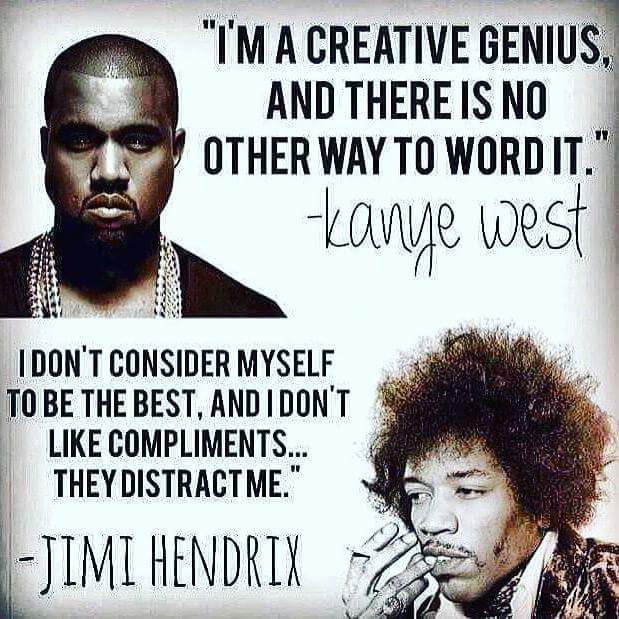