Bruce Cockburn was born May 27, 1945, seventy five years old today. He is a Canadian music legend, releasing albums since 1970 until today, fifty years into his career.  Along with being the face of Canadian folk-rock, he has been a voice of conscience for people and causes both within Canada and abroad.  He is certainly no friend or fan of the US government.

Below the fold is a selection of his songs from his earlier and most commercially succesful period (1970-1987). 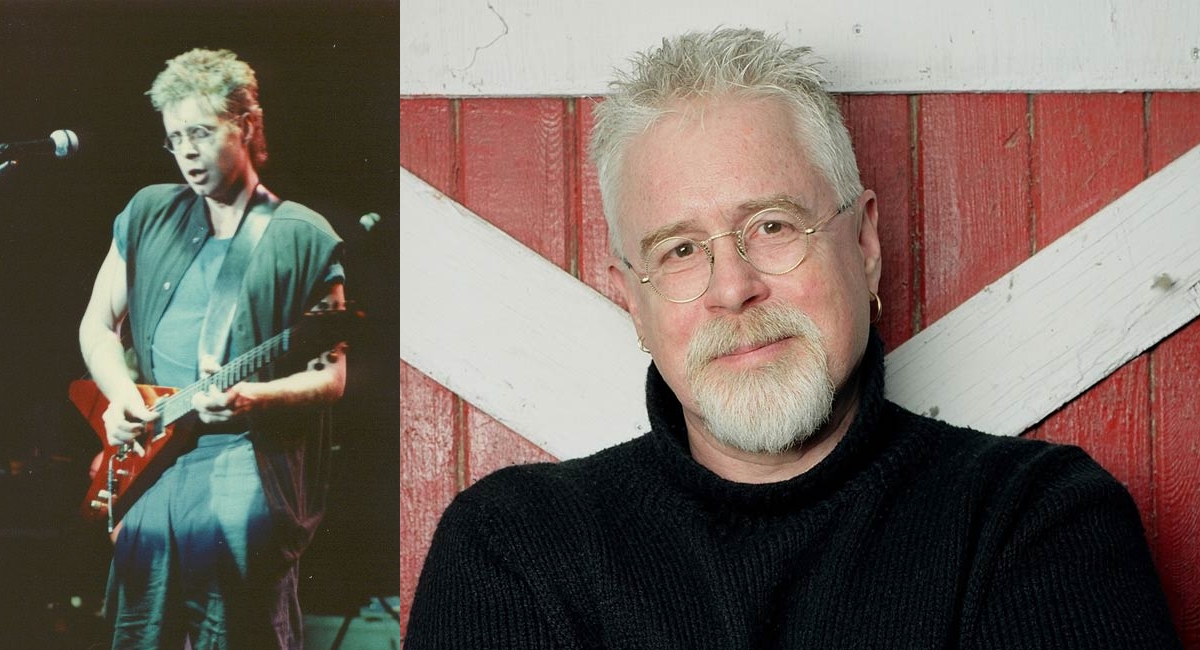 Which to do first, political or romantic songs. . .I’ll go with the safer stuff first.

“Coldest Night Of The Year” (1980) was Cockburn’s biggest charting hit, a great song of romance and lyrical poetry.

“When two lovers really love, there’s nothing there

But the suddenly compact universe of skin and breath and hair”

“Lovers In A Dangerous Time”

“Nothing worth having comes without some kind of fight

“Wanna Go Walking” is the closest Cockburn ever did to a dance track, and it’s damn good.  It’s about Judy Garland.

“I see your face on the wall and the magazine too,

Next thing I know the billboard out the window is you

I wanna go walking with you Judy

Through the movie of the world”

“Tokyo” is not a happy song, but poignant.  It was written about a news story he witnessed on TV while on tour, a car accident where a man drove off an overpass.

“Laughter” is a happy song, about his marriage, his first child and life in general.

Despite the title, “Fascist Architecture” is about possessiveness in relationships, not poltics.

“Wondering Where The Lions Are”  was another of Cockburn’s biggest hits.

Now for the political stuff….

“Call It Democracy” was a response to colonialism and imperialism of the 1980s.  Sadly, its meanings and themes have never gone away.  Cockburn’s popularity was so high in Canada at the time he could get away with profanity uncensored on AM radio.

“Padded with power here they come

Whose word is a swamp and whose brow is smeared

With the blood of the poor

Who rob life of its quality

Who render rage a necessity

By turning countries into labour camps

Modern slavers in drag as champions of freedom

Who makes the gun into a sacrament

The only response to the deification

Of tyranny by so called “developed” nations’

North, south, east, And it west

Kill the best and buy the rest

It’s just spend a buck to make a buck

You don’t really give a flying fuck

About the people in misery

Takes away everything it can get

Keep them on the hook with insupportable debt

Passing themselves off as leaders

Kiss the ladies, shake hands with the fellows

And it’s open for business like a cheap bordello

And they call it democracy (4x)

See the loaded eyes of the children too

Trying to make the best of it the way kids do

One day you’re going to rise from your habitual feast

To find yourself staring down the throat of the beast

They call the revolution

Takes away everything it can get

Keep them on the hook with insupportable debt

And they call it democracy

“If I Had A Rocket Launcher” speaks of the 1980s Guatemalan refugee camps in Mexico, and the Guatemalan helicopters that shot at and killed innocents.  US radio wouldn’t touch this one, I can’t imagine why….

“Peggy’s Kitchen Wall” – police brutality, arrogance and violence towards the victims.  Some things never change.  Especially not this week.
“Burn”

“Look away across the bay, yankee gunboat come this way
Uncle Sam’s gonna save the day, come tomorrow we’re all gonna pay”

“The Trouble With Normal” is about the slow anti-democratic decline of society, about “neo-liberalism” before the term was coined.

Strikes across the frontier and strikes for higher wage
Planet lurches to the right as ideologies engage
Suddenly it’s repression, moratorium on rights
What did they think the politics of panic would invite?
Person in the street shrugs “Security comes first”
But the trouble with normal is it always gets worse

“Stolen Land”, the theft of land from indigenous people around the world, not just Canada.

Apartheid in Arizona, slaughter in Brazil
If bullets don’t get good PR there’s other ways to kill
Kidnap all the children, put ’em in a foreign system
Bring them up in no-man’s land where no one really wants them, it’s a stolen land
[. . .]
If you’re like me you’d like to think we’ve learned from our mistakes
Enough to know we can’t play god with others’ lives at stake
So now we’ve all discovered the world wasn’t only made for whites
What step are you gonna take to try and set things right in this stolen land?

“Waiting For A Miracle” was the single from his Greatest Hits record of 1987.

They Lied: “Marriage equality” is a sham and a shambles » « Pipe Dreams: 44 terabits per second