Forty years ago, on December 15, 1979 the film “The Castle Of Cagliostro” was released.  On its own, it is a masterpiece of comedy and adventure (IMDB), but is also a landmark film in Japanese cinema (Rotten Tomatoes), not just anime, and even influenced foreign countries and entertainment.  It remains one of my all-time favourite films.

Yes, this post is a love letter.  I proudly wear my heart on my sleeve. First, there’s the history.  The Castle Of Cagliostro (from hereon CoC) was the second feature length film of the Lupin III series, which first appeared in manga in 1967, created by artist and writer “Monkey Punch” (real name: Kazuhiko Katou; b. May 26, 1937, d. April 11, 2019).  Equally important, CoC marked the directorial debut of Hayao Miyazaki who would go on to found Studio Ghibli and produce many legendary films (Princess Mononoke, My Neighbor Totoro, Porco Rosso, Spirited Away, Kiki’s Delivery Service, plus many others).  CoC was also one of the first anime films translated and distributed in the early 1990s as anime reached North American and European shores.  Love him or hate him (for me, both), Carl Macek and his company Streamline Pictures deserve huge amounts of credit for popularizing anime outside of Japan.

Second, the production.  Miyazaki was on a limited budget and had only a six month schedule to complete the film.  It’s rushed nature can be seen in the limited and stiff character movements (TV quality animation) laid over detailed scenery (similar to and influenced by the Ligne Claire style of Tintin).  In every other aspect, the movie is a marvel (e.g. the car chase scene, the castle design and layout) which makes the limited schedule and budget even more impressive.  Many traits of later Miyazaki movies are present: his fascination with vehicles and nature, attention to detail, character design (especially Clarisse).

Third, the characters.  Many Lupin III purists take issue with the character portrayals and how different they are from every other Lupin III film, manga or anime TV show.  Normally he, his gang and their friend (and jewel thief) Fujiko are much more ruthless and sexual, but in Miyazaki’s interpretation, they are much kinder and more humane.  As said in AniMat’s Classic Reviews on youtube, Lupin is much more a Robin Hood figure here than a ruthless master criminal.  This made them much more accessible to the casual viewer unfamiliar with the series.

This movie is a joy, it’s entertainment, a memory, a time capsule.  This past summer, Gizmodo’s James Whitbrook also lovingly spoke about it in a long piece:

The Castle of Cagliostro and the Power of Fantasy

A few weeks ago, a trailer for the new, incredible-looking 3D animated Lupin III movie came out. “It’s not really for io9,” I admitted to my editor and constantly-put-upon boss, Jill, as I frothed about how good it looked. “I love Lupin, but it’s not the kind of genre we cover.” Lupin III, of course, is about heists and thieves, not space or fantasy.

As you’re probably aware from the fact that the trailer has a blog on this very website you’re reading, I was allowed to get away with this particular indulgence. And that’s despite the simple fact that Lupin III isn’t really “genre,” that wonderfully vague word that has come to encompass everything from swords and sorcery, to superheroes, to cyberpunk, and anything and everything in between.

Lupin III is about daring heists and gentlemen thieves, wacky action capers but not anything as particularly wacky as going so far into the realm of the fantastical. I’ve been watching and loving the various anime series and reading Monkey Punch’s manga since I was a kid, but as far as writing about it on io9, I’d consigned myself to it never happening outside of the series pulling a maybe-Fast & Furious and eventually catapulting it to space. Or maybe blogging that time Lupin Stole Some Bitcoin for the tech angle.

Lupin III: The Castle of Cagliostro” can be found on the Internet Archive.

If you were around for videodisc games in the 1980s, you are bound to remember the game Cliff Hanger (game playthrough on youtube). which used clips from the CoC film.  The game was awful, even harder than Dragon’s Lair, but for many it was their introduction to anime. 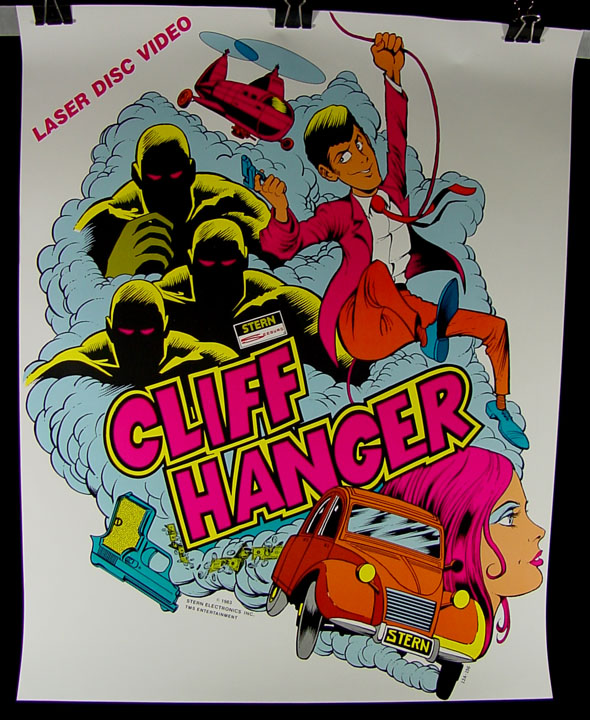 Lupin III has been around for more than 50 years, and the character and series’ influence on anime and Japanese society are vast.  There are many tributes and references to The Castle of Cagliostro, and one of the most memorable was the 1990s anime series “Here Is Greenwood” (Koko wa Greenwood), which is a great series unto itself.