Marie Sklodowska Curie (neé Maria Salomea Sklodowska) was born November 7, 1867, 150 years ago. She died on July 4, 1934, of aplastic anemia related to her work with radioactive materials. In 1995, she and her husband Pierre Curie were interred at the Panthéon in Paris, the country’s mausoleum for national heroes.

Marie Curie was a giant in the field of STEM. She is the only person to win a Nobel Prize in two different scientific fields, and members of her family (Curies) won five Nobel Prizes in all. She discovered techniques for detecting isotopes and identified two elements, Polonium and Radium, the latter heavily used in medical treatments. 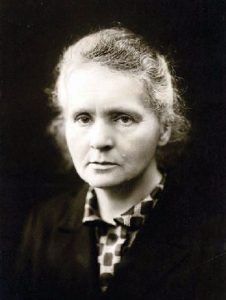 I would have posted this in November, but was unable to for personal reasons.

Let’s Remember: James Baldwin died December 1, 1987 » « Self, Care: My time away has not been voluntary