Mark Sandman was born September 24, 1952, and would have been 65 today. I say would have been because he died of a heart attack while performing on stage in Italy in July 1999, aged 46. He was the eldest of four children, three sons and one daughter. She is the only surviving sibling, three sons all dying due to illness.  Parents should never have to bury their children. 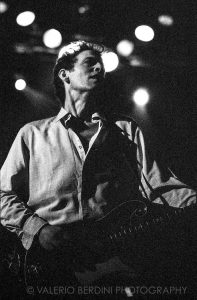 Mark Sandman was the singer, bassist and primary songwriter of the band Morphine which produced six incredible albums. Their “Low Rock” sound rode the wave of “alternative” music of the 1990s primarily due to their sound and unusual and minimalist instrumentation (two string slide bass, baritone sax, and six piece drum kit) though they have far more in common with jazz, beat poetry, groups of the 1970s and 1980s (e.g. Steely Dan, Two-Tone bands). The instrumentation sounds primitive, yet they produced a full sound. (Sandman would jokingly introduce Colley as the group’s “lead guitarist”.)  With incredibly strong songwriting, they performed live shows that sounded as good as their albums, and had a growing word-of-mouth fanbase.

Sandman made his first appearance with another Boston-based band, Treat Her Right, two members of whom made up the first Morphine lineup, Sandman with saxophonist Dana Colley and drummer, Jerome Dupree. Dupree left due to arthritis, replaced by Billy Conway who remained until Sandman’s death.  The documentary on Mark Sandman’s life is fascinating, a no-holds-barred and no whitewash telling of his life. He was a difficult man, but he was also motivated and had a musical vision of what he wanted. Morphine became the perfect vehicle for him both musically and personally, his bandmates becoming surrogate brothers to the ones he lost and had never gotten over their deaths.

Morphine is what I call dance music.  Songs like “Buena”, “Honey White”, “Thursday” and “You Speak My Language” can keep me on my feet all night.  There are plenty more where those came from.

Huffington Post: “Life After Death: The Legacy of Mark Sandman and Morphine”, 2011

They Didn’t Migrate: How do deal with an invasive species » « Left To Die: Callous and cowardly cops are here too