Being Childfree is the choice to never reproduce, to never have children.  Childfree people are capable of reproducing, but make the conscious decision never to have any.  (This does not automatically include those who are involuntarily infertile or incapable of having children, though it can.)  It is not “selfish”, and it is not something one chooses without a great deal of thought.  Environmentally, choosing not to have a “mini me” is the most unselfish choice of all. 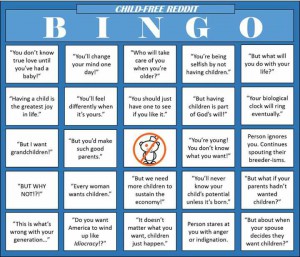 Being Childfree is a feminist issue.  Just as abortion, birth control and bodily autonomy are feminist issues and are a right (or should be), so is being Childfree.  And yet even among those who claim to support feminism and women’s right to bodily autonomy, you will hear an unspoken message from some: “You can choose when to have kids, but you must have kids at some point.”  Motherhood is not a requirement of being a woman, and women are not “failures” or “barren” for not having children. 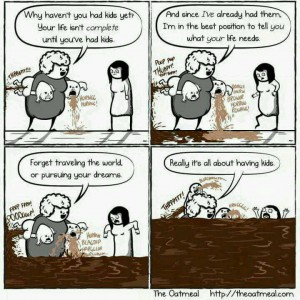 Being Childfree is an environmental issue.  There are 7.5 billion humans alive and another 300,000 added per day.  It is vital that we reduce the number of people consuming natural resources, and being Childfree is a painless and effective way of doing that.  Choosing not to have children is not “murder” or “euthanasia” (unless your name is St. Augustus), nor is it an advocation to kill people who are already alive.  It is the choice not to create any more, especially when there are already so many children without homes and living in poverty.

Being Childfree is a human rights issue of any existing or hypothetical children.  The UN’s Declaration of the Rights of the Child lists things that should be guaranteed to all children: equality; protection; adequate nutrition, housing and medical services; education; love by parents and society; recreational; the first to receive relief; protection against abuse and neglect; the right to be brought up in a spirit of understanding.  If one lives in a situation where these things cannot be provided, why is it wrong to not have children until it is?

Being Childfree is an economic issue.  Poverty is rampant and wages are declining.  Choosing to have children when you can barely afford to feed, house and clothe yourself is irresponsible.  A tax deduction and child allowance bonus are not going to cover the cost of living, no matter how big they are.  “Perpetual economic growth” is not possible, and contraction – both economic and population – is inevitable (e.g. Japan’s aging population).  The other option is social and environmental collapse. 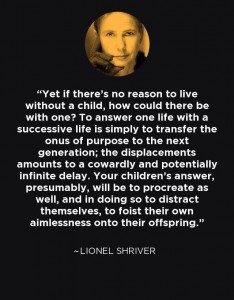 I have long been part of various Childfree groups and discussion forums. I have read many from women who report gynecologists refusing them sterilization or long term birth control (e.g. IUDs) because of their age (in their twenties), telling them, “Come back when you’re 35 and have kids”.  Some report being denied Depo-Provera because of side effects on women’s bodies (e.g. loss of bone density).  The implication is that women aren’t mature or informed enough to make up their own minds about their own bodies.  Even if women later regret their decisions, it is still their decision to make, not a doctor’s.  Nobody “owes” children to society or grandchildren to their parents.  And no one gets to decide that people have to be pregnant (re: abortion rights).

What made my blood boil and set me off was an article on Vox written by E. P. Wohlfart, a Swedish archaeologist, about her experiences with a gynecologist and other doctors while seeking voluntary sterilization.  (She wrote it in November 2015, it was reprinted on Vox in February 2017.)  Not only were the gynecologist’s questions insulting, she “referred” Wolfhart to a therapist.  How Soviet of the gynecologist, declare Wolfhart “mentally ill” for not conforming with society and wanting permanent birth control.

Wolfhart’s (or any woman’s) reasons for choosing sterilization are hers and hers alone, and no one has the right question them.  She never wanted kids, she wanted worry-free sex with her husband, and as an archaeologist living in countries where adequate medical care and birth control may not be available, she had genuine concerns for her own safety.  And yet a doctor felt it was her place to question and dictate Wolfhart’s life.

I told my doctor I didn’t want kids. She sent me to a therapist.

“What about when you and your husband get divorced, and you meet someone else?”

She said when. The gynecologist’s voice was steady and detached, but her lips pursed in a condescending smirk and her eyes gleamed. I was 25 years old and had married my best friend three years earlier. Everything about being married brought me joy. I certainly had no intention of getting divorced.

It is contradictory and sexist to believe women should have the right to birth control and bodily autonomy but then also deny women the right to choose voluntary sterilization.  Why is a man having a vasectomy “socially responsible” yet a woman doing the same is “bizarre” and “a sign of mental illness”?  Even some who claim to be socially liberal can be as reactionary as the most fanatical theist.  There is no more a “biological clock in everyone” than there are voices in everyone’s heads. 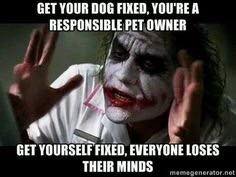 People have the right to be Childfree.  The choice to be Childfree does not impinge upon the rights of those who want children nor prevent them from having children any more than non-heterosexual marriage impinges upon or prevents “straight” marriage.  Questioning people’s decision to be Childfree is invasive and offensive, even if sterilization is not part of the discussion.

I am genuinely surprised that the issue of being Childfree has not been discussed before on Freethought Blogs, especially since women’s bodily autonomy is such a strong issue here.  I checked.  It has only been mentioned twice in passing, once by myself. 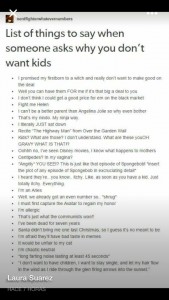 As It Happens: I’m not the only one talking about this » « Climate Changes: This year it’s a double whammy