Got some more demons to ponder.  I was able to work out a lot on some of them, less on others, but mostly I just need to fill in a few gaps.  Some of these are more interesting than others. 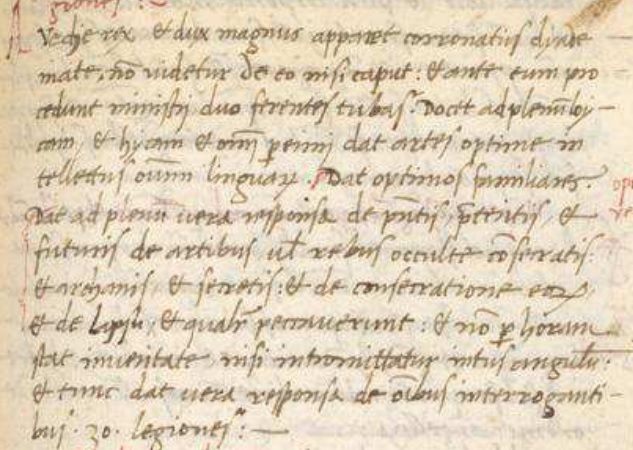 The first boy in the book, “King Avedje, a great duke appearing crowned with a diadem, there is nothing visible of him but his head, and before him proceed two ministers carrying trumpets.  (I love that trumpets are tubas in this BS.)   Teaches fully logic and (hycam?) and all (pereimi?) gives best arts, best understanding of all languages.  Gives best familiars.  Gives full true responses of past present future, arts or things occult consecrated and arcane, and secrets.  (gibberish coming…) And of consecration them of the (Lupyh?),  let him be then forced into a corner, and then  gives true responses without being asked, 30 legions.”

I think I confirmed this guy for appearing in The Book of Oberon under the name “Ebeyeth,” where he is also described as a floating head crowned with a diadem, but the rest of the description there is too short, leaves too much out to be of much use. 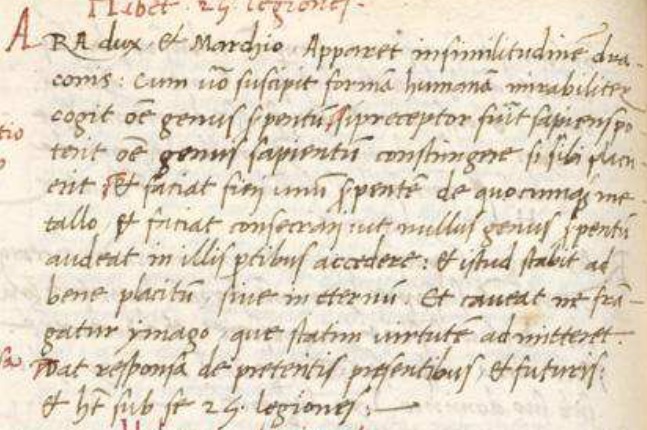 This one man… no fucking idea.  Trying to implement what I can learn from cartomancer in the comments:

My best effort to make sense of that: “Ara, duke and marquis, appears in the likeness of a dragon.  When assuming the form called human, has marvelous knowledge of all types of snakes, if the teacher is able to be wise, all kinds of wisdom contained.  If son (plaenerit?) and makes it one snake of (quorumas?) metals and makes hallowed, that no kind of snake dare to approach them first, and this rule does not stand well forever.  And should I break the image, then power is allowed. Gives responses of past present and future, has under him 29 legions.”

Hilariously, depending on what word it’s next to in google translate, “serpentum” becomes “florida.”  There is no demon that appears in the form of a dragon and has this snake-obsessed of a description in the sources I’ve read.  Volach has the snake control and rides a dragon, but has a separate entry in this book and is otherwise fairly different.  Most demons appearing in the form of a dragon are more elaborately described, with multiple heads and what have you. 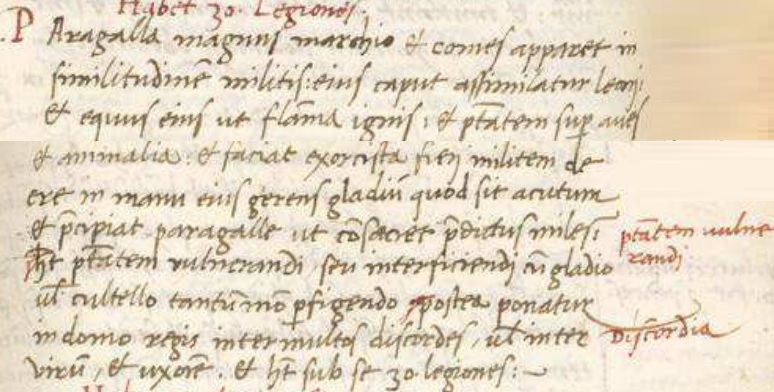 “Paragalla – great marquis and count – appears in the likeness of a knight, head like a lion, riding on a fiery flame.  Controls (carries over?) birds and animals and makes the exorcist knights of copper in hand carrying sword that is sharp, and show himself Paragalle and (consacrer?) aforementioned knight.  ( worse gibberish coming) Has carrying wounds or (interfiriendi?) with sword or knife only (mom? mon?) be fixed later placed in kings house, between many discords or between husband and wife.  Has under him 30 legions.”

There are a few lion-headed knights in demonologies: Boab and Saylmon from this book, Allocer Sabnach and Purson/Curson from the Pseudomonarchia Demonum and related books… And that’s not including demons that are just lions, or lions with wings, or lions with snake tails or duck feet or whatever.  I think these writers imaginations were broken.  Anyway, none quite match the description of Paragalla here. 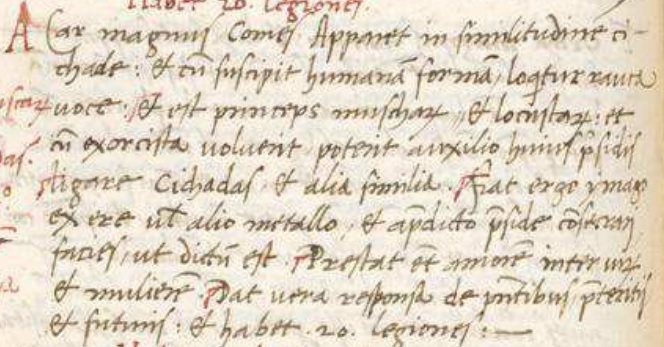 This is my favorite for one weird detail.  I think he appears in the form of a cicada, which is unusual and interesting.  That word looks like “cichade,” and later “cichadas” appears.  Latin for cicada is “cicada,” Italian is “cicala.”  This isn’t quite either of those and I could be dead wrong, but what else can it be?  My best translation:  “Great count Acar appears in the likeness of a cicada, and then in human form speaks with a rough voice, and is the prince of flies and locusts, and per the exorcist powerfully help people control and bind cicadas and other similar things.  Let there be, therefore, an image from copper or other metals, of aforementioned president consecrated. Provides love between men and women, gives true responses of past present and future, has 20 legions.”