It’s been a long few weeks since I last posted, thanks to the round of viral crud that went around my house and the slog through the festival of pollen that is North Texas right now that preceded and followed.  It hit everyone, just about at the same time.  Seriously, even the possum that hangs around my patio seemed to be sniffling a bit…. 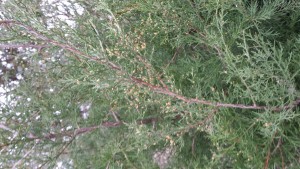 The culprit, or at least one of them….

Anyway, I received a good piece of advice during this time, when I didn’t seem to be able to focus on much of anything: focus on writing.  Though the giver of this advice meant that I should focus on the fiction I’ve been neglecting, I had to ask myself how I’m spending focus on the letters to elected folks.

I’d crafted–really crafted–some of these letters.  And given that I live in a red area of a red state, I’m crafting them for an audience who most likely won’t listen.  And given that the responses I’ve received haven’t always had much of anything to do with what I’d written about, I needed to switch tactics.

Postcards.  Printable postcards.  I can only fit so much onto them.  I have to keep the message simple and clear.  There’s a challenge to this, though, since my impulse is to provide all the reasons why I’m requesting the elected official support or oppose whatever measure or nominee the letter addresses.

So I’m trying to look at these postcards in the same way in which I look at formal poetry–sonnets, villanelles, sestinas, and the like.  Part of the challenge of writing in these forms is that one can’t expound at length on the poem’s subject.  And it’s easy to fail at linking together the parts of poem to make a coherent whole.  The challenge becomes both an intellectual and an aesthetic exercise: the logic of the poem must hang together, and the language of the poem must support that logic.  It’s easy to fail at writing poems that do both.

But when formal poems do work, they work on many levels.

Pantsuit Republic, the Texas offshoot of the Pantsuit Nation movement, recently launched a podcast that covers not only politics in Texas but also the issues behind it. I spoke with Emily Dylla, coordinator and producer of the podcast, about the content and direction of the show.

Freethinking Ahead: There are so many media available for getting the word out to folks about politics and calls to action. Why did PSR choose to launch a podcast?

Emily Dylla: We thought it would contrast nicely with all the social media work that we do. Social media is so fast. It’s really up-to-the minute. And in a podcast, you might not be up-to-the-minute, but you can get into a lot more depth on subjects. So we decided to take an educational approach to what we wanted to do with the podcast. It’s really meant to go into any range of topics or issues that we feel are somehow relevant to PSR members and anyone else who tends to more of a progressive approach.

So we thought it would complement all the frantic activity that we do on Twitter, Facebook, and everywhere else.

FTA: Something that feels a lot less ephemeral, right?

ED: Exactly. And it’s really nice because podcasts, for people with crazy schedules, like myself–I’m a graduate student, I work, I have a family, I’m an avid runner, so I’m running all over the place all the time–a podcast is really nice because you can listen to it while you drive to work, while you might be out on a bike ride or running, or cooking dinner in the evening. We thought it would to reach people that way as well.

FTA: What direction would you like to see the podcast take over the course of the 2017 Texas legislative session? And after?

ED: We’re still in the process of determining this, because we are just about to release our third episode this week. We are still finding our comfort zone and a format that we can fall into, but ultimately I’m hoping that the podcast will focus on the four core areas that PSR is interested in. This is women’s empowerment, that’s one. Health care is another. Social justice is a third, and fourth is political empowerment of Texans.

So we’ll certainly be following on the podcast what our teams who are specifically organized to address those core issues be following what they’re doing. They’re tracking legislation and organizing things, for instance, HB 948, that’s the abolition of abortion in Texas act, introduced by a representative from Tarrant County, Arlington. We’ll be checking in with those teams throughout the course of the legislative session.

But we’re also going to be focusing on more broad issues. With this third episode, we’re kicking off a series on reproductive health and reproductive rights in Texas. We start with abortion, since that’s what everyone thinks of, and we pay attention to that a little bit, and then we’ll expand or at least attempt to expand the conversation belong the abortion debate. Often times people end there, they get frustrated with the ideological clash and don’t see much point in having the debate. We’ll be talking about things like sex education, contraception access in Texas, and also topics that people don’t necessarily connect to reproductive rights so much, like livable wage, affordable child care, how reproductive health specifically concerns LGBTQ communities.

FTA: Personal narratives and statements are such a powerful way to show the day-to-day effects that politics has on the people’s lives. Can you talk a bit about including these as part of the podcast? And why you have the authors submit these in their own voices?

ED: We give people the option to do it in their own voices, and we also give them the option to remain anonymous, though no one has taken us up on that yet. We decided on the personal narratives as an homage to our organizational roots. Like so many groups, we spun off of Pantsuit Nation. On the day before the election on the PSN Facebook page, someone said we should have state groups, and all of a sudden, state chapters were popping up all over the nation. What eventually became PSR was started that day by Dona Kim Murphey. I was one of the first people, when she asked for volunteers for moderators, I thought, yeah, sure I can do that.

From the get go, PSN’s argument has been that there is great power in storytelling. Storytelling allows the listener a means by which he can come to understand another person’s perspective or situation in this rich and really effective way. So we thought that was important.

From the beginning, PSR has distinguished ourselves from PSN by being very politically active. A lot of the statewide groups are that way too. We’ve always agreed with Libby Chamberlain, the founder of PSN, about the effects storytelling can have. And we thought there was more political and social good that PSN and PSR and our local chapters can do. So when I started thinking about putting together this podcast, I wanted it to reflect the two sides of PSR: political action on one side and community building and solidarity building through storytelling on the other.

FTA: It also seems to foster an intersectionality. Was that also part of your aim?

ED: Absolutely. From the beginning our two major goals have been one, we’re going to be politically active in Texas–we want to focus on changing the social and poliitical landscape of the lone star state–and also we need to be explicitly intersectional in our approach. We can’t have this be another voice of white feminism. And that’s something that PSN came under fire for. But luckily Dona had already been very vocal in her leadership about making sure that PSR considers not just gender but race, ability or disability, language, all those kinds of things.

FTA: Which is especially salient in Texas, speaking of language, since most people don’t really think about that here.

ED: That was one of those things that we’ve been ranting about this evening. There are so many things to rage about but the whitehouse.gov page taking every single bilingual page down. About half the population in Texas is bilingual, so it’s ridiculous that they would do that.

FTA: This is why we all fight the good fight, right?

FTA: What do you hope Texas listeners will get from the podcast?

E: Like I said before, the PSR podcast is meant first and foremost as an educational tool, so we have episodes planned on everything from the reproductive health and rights series I already talked about to dealing with online bullying and harassment to activism fatigue. We’ve got one planned on intersectional feminism, and we’re trying to frame all of these topics specifically to how they impact Texans.

And so my hope is that our listeners will learn a bit more about a subject with which they already might be a little familiar or a lot about something with which they never really engaged. So basically we want to provide education.

I’m an educator myself, and I’ve been a graduate student for a long time. And really enjoy the teaching process. The podcast is a really interesting medium through which one can at least attempt to teach subjects. So we’ll see how it goes.

FTA: Since many of FtB’s readers are outside Texas, what might listeners across the US get from your podcast, especially in light of the fact that so many state and local elections followed the national trend in 2016?

ED: One of the things I think people can get is that the podcast highlights the work that PSR does as well as our local chapters. We have between 35 and 40 local chapters across Texas that are affiliated–we all work together. PSR has already served as the inspiration for a lot of these Pantsuit Nation derived organizations, because of those two things I mentioned earlier: our commitment to political activism number one, and our commitment to inclusivity and intersectionality.

We talk about ourselves as being not non-partisan but post-partisan, we’re trying to get that term to take off. We’re trying to foster an environment that doesn’t look at political affiliation. We have a lot of Democrats, but we also have independents–I’m one of them–we have Republicans, we have third-party members. So we just tried to focus on issues that are important to all of these people. Because there are Republicans out there who are pro-choice and don’t want to see people have their access to voting cut off. So that’s one of the things that I hope the podcast offers, models for effective engagement in both political activism and intersectionality. I think even more than that, the podcast offers a perspective of Texas.

FTA: Ah, yes, outside all the lovely stereotypes everybody has.

ED: Exactly. I don’t think Texas has quite as crazy a reputation as Florida, but this is a really conservative state. There’s definitely a reputation that we do have, but when you get down into it, there are a lot of progressives who live here. And not just in the big cities. I’m out on a dig, and I talked to multiple guys, and they’re actually really liberal. They’re like, “Yeah, women should be able to choose.” That’s so awesome. So there are a lot of progressives people out here, and our numbers are increasing all the time.

If our podcast can do anything to temper our state’s reputation, that would be awesome. This includes our reputation among Republicans. A lot of them don’t know what’s up with their party and feel like they don’t belong there anymore.

More information about the podcast is available at the Pantsuit Republic website: http://pantsuitrepublic.com/

The podcast is available on iTunes here: https://itunes.apple.com/us/podcast/pantsuit-republic/id1196901541?mt=2