So I was feeling punchy this morning and decided to mock two people I follow on Twitter: FTB’s own Natalie Reed, and April Gardner aka Slignot on the topic of electronic books vs. physical books: 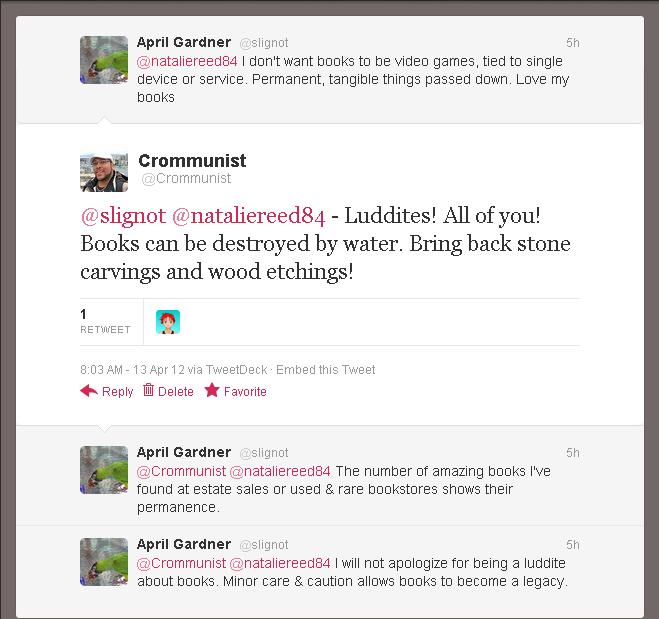 My point was simply to point out that there has been pushback against every new technology by those who cry that humanity will forever lose the specific charms of whatever is being made obsolete. There is nothing inherently wrong with digital distribution of knowledge (either as books or whatever else), and the world will mourn the loss of the book in the same way it mourned the loss of the rotary phone, the telegraph, and the horse-drawn carriage. Yes, there will always be techno-hipsters who insist that vinyl records are the best way of appreciating music, and I’m sure a niche market for books will persist after the rest of the world moves online, but I’ve always found such allegiance to obsolete technologies a very weird thing to insist on. Then again, I find listening to house music, wearing vests, and drinking bubble tea weird to the same extent, so there’s that.

What followed was an epic fight between Natalie and myself over the dangers associated with eliminating the book. To hear Natalie tell the story, books are inviolable and physical depositories of knowledge that cannot be selectively edited, censored or controlled nearly so easily as, for example, ebooks on a Kindle. The day that we no longer have the option to purchase a book and have sovereign rights over its content is the day that humanity loses a fundamental check on those forces that would exert undue influence over humanity’s access for information. We know that corporations, given the chance (and the profit motive), will take away human freedoms so long as they can get away with it. She does not trust those forces with the power to control the flow of information.

My point, essentially, is this: the loss of the book will go unlamented by most people if they have access to both alternatives. The book will not be eliminated, it will simply be phased out in the same way that calculators replaced abacuses. Do we lose some of the tangible benefits – the look, the smell, the feel, the ability to scribble marginalia – when we lose the book? Yes. Any change means the loss of something. The relevant question is do we lose something that has inherent value?

Natalie’s initial argument was that the loss of control over the flow of knowledge is inherently dangerous, and that abandoning books for digital media could potentially result in such a loss. I find this argument fails for two main reasons. First, if we are talking about the global control of information, digital media beats books hands-down every time. There are a limited number of publishing houses in existence, and they decide what warrants getting pressed onto paper and what doesn’t. While you or I could, in theory, start our own publishing company, the financial and logistical barriers are insurmountable for the majority of the population. In comparison, if I wanted to publish an electronic book tomorrow, the only thing that would stop me is thinking up a snappy title.

The second reason I don’t find the “control of information” argument compelling is that digital release lowers the barriers to access in ways that books simply cannot touch. If my blog was a ‘zine’ (remember those?) I would have a readership of like 5 or 6 people, tops. Books require a complex system of shippers and vendors to get into your paper-touching hands. Again, one could go the self-distribution route, but you couldn’t do that and work a full-time job and have a social life and, and, and. The corrolary holds for the reader – books require you to be in either convenient proximity to a vendor or, if the author is lesser-known, the person actually writing the books. It is far easier for me to subscribe to my favourite author and download hir newest tome than it is for me to rely on the library or bookstore to have something in stock.

Now the specific model Natalie objects to – that of the Kindle – where content is 100% controlled (and even possibly edited) by the distributor, is a shitty model. If all books went the way of the Kindle, we’d be in serious trouble indeed. However, I have serious doubts that such a scenario could ever come to pass. For people in North America with ready access to the internet, the first source for knowledge retrieval is Wikipedia, not the electronic version of The Britannica. Content producers are finding new ways of making distribution of free media profitable (or at least cost-neutral). Any attempt to ‘corner the market’ on human knowledge would fail as quickly as it takes Anonymous to stop laughing at the attempt. A corporate entity attempting to funnel all media through their coffers would face fierce backlash from governments and individuals alike. Fearing the Kindlization of the collected works of humankind is an interesting doomsday scenario to imagine in the abstract, but not one I am going to lose sleep over.

We do not necessarily lose control over the distribution of information when using digital media. In fact, the opposite is likely the case – by lowering barriers to accessibility, you increase the ability of both authors and readers to exchange ideas. Natalie suggested that books, checked out of a library, are far more accessible to people with limited incomes. Not everyone can afford the price of an e-reader, let alone the cost to buy every book ze wants to read. If every book were to disappear from existence tomorrow, that would indeed be a serious problem. However, that is not a problem associated with electronic media per se – it is a challenge of ensuring migration doesn’t leave people behind. This issue, however, is entirely tangential to the question of whether or not we would, as a civilization, lose something important (Natalie used the word “crucial”) if books went the way of the daguerreotype.

I have tried to avoid saying that ebooks are better than physical books (except insofar as the criticisms of them are simply not true). However, there is far more interactive potential for electronic media (including ebooks) than for printed word. The question of environmental toll is perhaps a wash – how do clearcuts for paper stack up against strip-mining for minerals? – but we are in the infancy of the ebook, and the twilight years of the paperback. I have no doubt that as we find new ways to integrate technology into our everyday lives, and find innovative ways to present content, books will simply fade into the background of a technology that was important, but that we have outgrown. Some will lament the passing of the book – I can’t say I’ll miss it.

I imagine that this debate will continue in the comments, but it’s easier to do it here than on Twitter. Less spammy too.

But black people had slaves too! » « Movie Friday: The Mysterious Mysteries of Paranormality