Aaaaaaaaaaaaand there it is – there really are differences between women and men therefore it’s fine to discriminate against women and Tim Hunt wuz robbed. 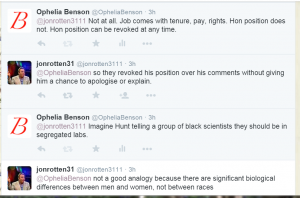 Ophelia Benson ‏@OpheliaBenson 3 hours ago
@jonrotten3111 Not at all. Job comes with tenure, pay, rights. Hon position does not. Hon position can be revoked at any time.

jonrotten31 ‏@jonrotten3111 3 hours ago
@OpheliaBenson so they revoked his position over his comments without giving him a chance to apologise or explain.

Ophelia Benson ‏@OpheliaBenson
@jonrotten3111 Imagine Hunt telling a group of black scientists they should be in segregated labs.

jonrotten31 ‏@jonrotten3111
@OpheliaBenson not a good analogy because there are significant biological differences between men and women, not between races

Note that “jonrotten” uses a photo of Hitchens as his thumbnail. People who use photos of Hitchens for their thumbnails are guaranteed to be assholes.